Tesla Model S gets a steering wheel like no other in any production car.The butterfly-shaped steering wheel has no stalk and makes use of AI and force touch buttons.
By : HT Auto Desk
| Updated on: 29 Jan 2021, 10:54 AM 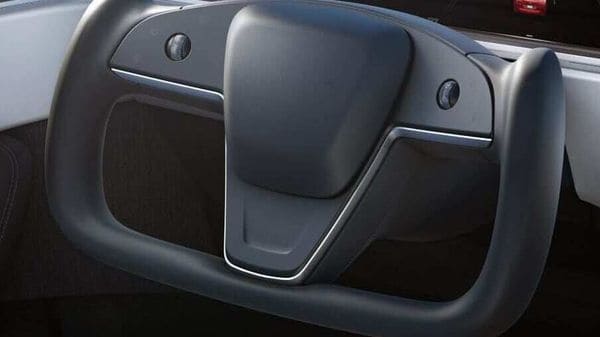 It is a massive change but is the steering wheel on the updates Tesla Model S legal?

Tesla Model S was given a string of updates just a few days back and among the several highlights was a radically futuristic steering wheel which looked something straight out of an airplane. And while it grabbed maximum eyeballs, making Tesla fans swoon over it, not everyone is mighty pleased with this particular update. A US media report suggests that road safety authority in the US will look into the steering wheel and seek more information from Tesla regarding it.

A report in Motor1 states that the National Highway Traffic Safety Administration (NHTSA) is looking into the update with keen interest and that it has not yet determined if it meets US' Federal Motor Vehicle Safety Standards. A spokesperson for NHTSA was quoted in the same report as saying that Tesla would be approached for more information.

Essentially, what this means is that while the steering wheel may look futuristic, it isn't yet clear if it can be deemed legal inside a production car.

Why this steering wheel has generated so much interest - and the consequent regulatory glare, is that it is unlike the conventional round or round and flat-bottomed wheels seen in production cars. Instead, it is designed like steering systems inside airplanes, has no stalk and makes use of AI and force touch buttons.

But is it possible that Tesla did not engage with government officials before introducing such a massive update? The California-based EV maker is yet to comment on this and it is as yet unclear if the new Model S will be allowed to reach customers with its futuristic wheel.

Meanwhile, Tesla is also highlighting the other updates to the electric sedan. The list includes a larger 17-inch infotainment screen which is now in landscape orientation. There is another screen for passengers at the rear while the dashboard has been re-deisgned as well.