Tesla's California plant buzzing ahead of permission to resume operations 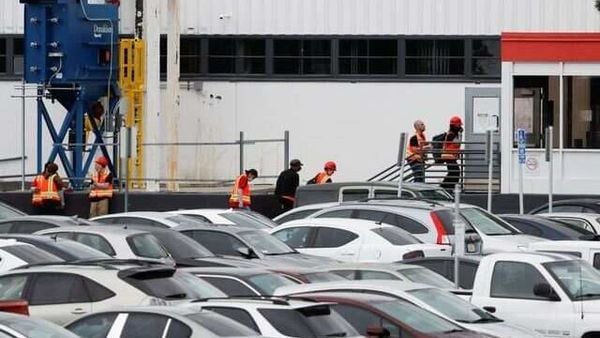 Workers in orange vests are seen outside Tesla's primary vehicle factory after CEO Elon Musk announced he was defying local officials' restrictions against the spread of the coronavirus disease by reopening the plant in Fremont, California.

California’s Alameda County said Tesla Inc. could reopen its lone U.S. plant next week without acknowledging that it’s already been operating for days, offering little clarity on whether the company is currently in violation of local virus-lockdown measures.

Chief Executive Officer Elon Musk made it abundantly clear via Twitter that he has no intention of continuing to abide by a local ban on nonessential activity, which county officials have said includes Tesla’s factory in Fremont, California. Employees at the plant, who declined to be identified citing company policy, say they’ve been recalled to work and have resumed vehicle-assembly operations.

Representatives for the electric carmaker didn’t respond to a request for comment.

Tesla has roughly 20,000 employees in the San Francisco Bay area and 10,000 at the factory, which makes the Model S, X, 3 and Y. The county warned earlier this week that Tesla appeared to be in violation of its work-stoppage order.

“If the reports we have received are true, Tesla is engaging in work beyond Minimum Basic Operations, and is in violation of the health officer order," Colleen Chawla, the county Health Care Services Agency director, said in a letter Monday. “We hope that Tesla -- like other businesses who have been notified of noncompliance -- comes into compliance with the order without the need for additional enforcement measures."

Shares of the company were little changed in after-market trading Wednesday after falling 2.3% earlier to close at $790.96.

California’s attorney general, Xavier Becerra, said in an interview on CNBC Wednesday morning that the state is prepared to enforce its stay-at-home rules if needed to prevent the spread of the coronavirus. That came after county health officers issued an unusual statement late Tuesday after reviewing the company’s latest safety plan.

The officials said Tesla can prepare “for a possible reopening as soon as next week" if it follows some additional safety recommendations, and public health indicators remain stable or improve. They also pledged to work with local police “to verify Tesla is adhering to physical distancing, and agreed-upon health and safety measures are in place for the safety of their workers as they prepare for full production."

Musk, Tesla’s chief executive officer and largest shareholder, said Monday that Tesla was restarting production at the plant in Fremont and would defy the county officials who had ordered the company to keep the factory closed. He got support from President Donald Trump.

The county and six municipalities in the densely populated region decided in late April to extend their restrictions on businesses through the end of May to battle the spread of the coronavirus. While California Governor Gavin Newsom announced last week he would let some manufacturers in parts of the state reopen starting May 8, he also said local authorities had the ability to keep stricter measures in place.

The governor on Wednesday downplayed tensions between county officials and Tesla over the reopening schedule. (Read full report here)

“They have made public announcements that they have worked with Tesla and they have put together a process where they will reopen," Newsom said during a regularly scheduled press briefing. “So progress is being made in that space. Anytime there’s friction, we hope to make progress."

The Bay area was the first region in the country to lock down via shelter in place orders and has been the most cautious about reopening, citing the need to ramp up testing capacity, contact tracing and make sure that there is an ample supply of PPE, or personal protective equipment. County officials have yet to respond to numerous questions about where the county stands on meeting those indicators and why Tesla appears to be getting special treatment.

Musk sent an email to employees early Tuesday: “Just wanted to send you a note of appreciation for working hard to make Tesla successful. It is so cool seeing the factory come back to life and you are making it happen!!" he wrote in the message seen by Bloomberg News.

Two workers who have returned to the plant said they were required to watch a safety-training video. One said the company handed out masks and had put up plexiglass stations in the break room. Another said plastic curtains hang from the ceiling as barriers to keep workers separated from one another, and that the carmaker is taking employees’ temperature using thermal scanners.

The work in Fremont comes as Tesla is actively seeking a new location in the U.S. to build its second gigafactory. Musk has also said that Tesla would move its headquarters and future programs to Nevada or Texas. He wrote Saturday that Tesla would decide whether to keep manufacturing in Fremont based on how Tesla is treated in the future.

After prevailing in a defamation suit and emerging mostly unscathed from a court fight with the Securities and Exchange Commission last year, Musk was not shy about suing Alameda County. Tesla filed suit against the county on Saturday.

Musk has claimed Covid-19 isn’t all that viral a disease, called panic about it “dumb" and theorized fatality rates are overstated. He’s also promoted the antimalarial drugs President Donald Trump embraced that haven’t proved effective and wrongly predicted that new cases would be close to zero by the end of April.

Tesla’s standoff with California has come to represent the tense debate playing out in states and counties across America over how fast businesses should be allowed to reopen. The nation’s top infectious disease official, Anthony Fauci, warned against reopening the economy too soon during a Senate hearing Tuesday, saying that doing so risks new coronavirus outbreaks throughout the U.S.