At the delivery event of the Tesla Model S Plaid, CEO Elon Musk had said he hopes that people will get accustomed to the yoke steering wheel and even start liking it.Tesla is also offering a round steering wheel option in the configurator for the new Model S.
By : HT Auto Desk
| Updated on: 16 Jun 2021, 07:51 PM 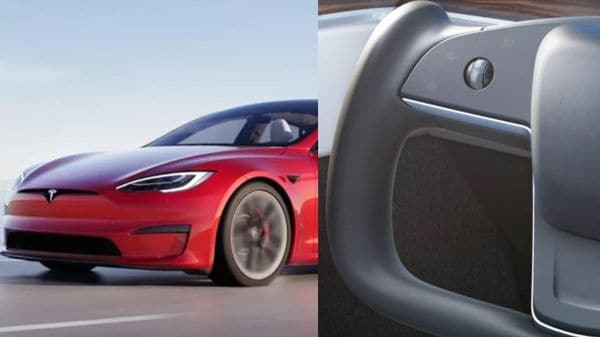 Tesla recently updated its Model S with a host of new features and functions including a new yoke steering wheel in place of the conventional round one. The steering wheel on the Plaid version of the Model S, that looks similar to control wheels inside the cockpit of an aeroplane, has received mixed response from customers.

As more and more people have started getting behind the wheel of the new Model S, they are sharing their feedback videos about the butterfly-shaped steering wheel. One of the videos posted by OCDetailing on YouTube shows that getting used to the new kind of steering wheel can be a learning curve, especially in parking spots where hands get all over the place due to lack of space on the wheel.

A traditional round steering wheel lets one easily steer in any and every direction but with a cut-off wheel, practicality of the yoke steering easily has been questioned by many. The videos show that while lane changes are performed without any issues, it gets cumbersome to smoothly steer in tight turns. The drivers' hands cross with each other often. A Twitter user and a Tesla owner wrote, "I wonder if they adjusted the steering ratio to adapt for this shape."

That is definitely something. I wonder if they adjusted the steering ratio to adapt for this shape. pic.twitter.com/fnY3pj2MCP

Though the new steering surely will take time to get used to, there are a couple of good things about it too. The view of the digital instrument cluster is unobstructed and the integration of the turn signals on the yoke also works well. Some people also praised the new design of the steering wheel, calling it a forward thinking step by the OEM.

Tesla, however, is also offering a round steering wheel option in the configurator for the new Model S.