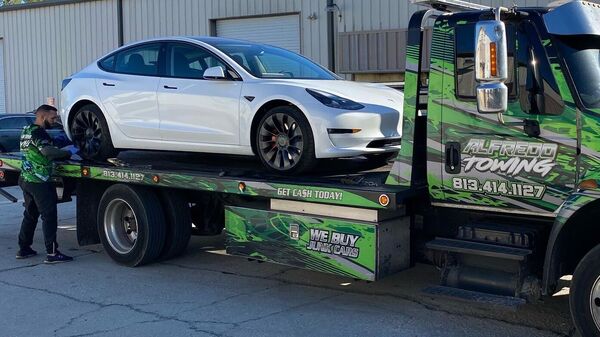 A Tesla customer received a Model 3 sedan with missing brake pad and upon contacting the company to inform the about the issue, she was asked to shoot a video of the issue and send it to them. The company responded that the brakes sounded normal for a performance Model 3.

The customer shared a screenshot of the response she received from Tesla. “Brakes on performance Model 3's and Y's are known to be louder than on standard vehicles due to the size of the larger brake pads. When you arrive for your appointment, we will have a technician perform a test drive with you to inspect the brakes," the response read.

However, she was told that it would be weeks before Tesla could offer her an appointment to see the car. She then decided to take her car to an independent shop where the technician found that there was no brake pad whatsoever on the inside rear driver’s side brake rotor. He discovered that the caliper itself was simply pressing into the rotor.

Watched as wheel was removed and learned there was NO INSIDE BRAKE PAD installed on the wheel. 😳 Called Tesla roadside and had car towed directly to Tesla Service Center. pic.twitter.com/haKGGOSYxr

After this she got her vehicle towed directly to the Tesla Service Centre after calling the roadside assistance service. After waiting for almost a week to be given a loaner, and over three weeks since then, she was informed that the service centre is still ‘waiting on parts’ and continue to push the ETA back each week. “If Tesla can build and ship new cars, why can’t warranty repairs be made?" she wrote.

The news comes at a time when Tesla has already been facing flak for its customer service experience as well as its Autopilot system. The EV company's vehicles have registered one crash for every 4.31 million miles driven with the Autopilot system active during the October-December period last year.