Tata Punch will compete with Nissan Magnite and Renault Kiger in the sub-compact SUV category.
By : HT Auto Desk
| Updated on: 26 Oct 2021, 12:38 PM 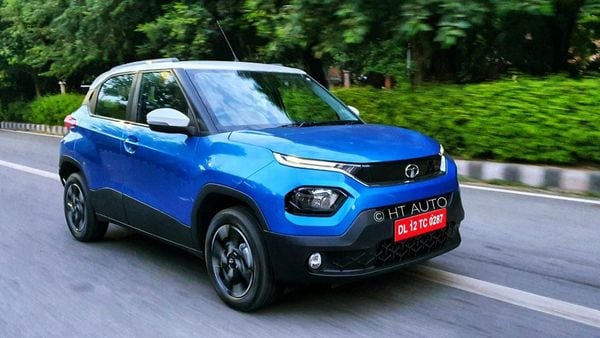 With Tata Punch launched in India last week, a new player in the fiercely competitive sub-compact SUV arena has entered. With prices starting from ₹5.49 lakh (ex-showroom, Delhi) of the new SUV, Tata Motors plans to reach a wider customer base across metro cities as well as smaller towns.

Tata Punch will face some stiff competition from Nissan Magnite and Renault Kiger as both hold the position of affordable SUVs in the market. Tata Punch that comes in four variants named Pure, Adventure, Accomplished and Creative is ready to take on Magnite's five variants XE, XL, XV, XV Premium and XV Premium. Also, it will lock horns with Renault Kiger's four variants, RXE, RXL, RXT, and RXZ.

Here is a variant-wise price comparison between these three SUVs.

Calling the variants as Persona, Pure Persona being the base variant of Tata Punch, its price starts from ₹5.49 lakh. It is followed by Adventure Persona whose price stands at ₹6.39 lakh ( ₹6.99 lakh if AGS option is selected) and Accomplished which can cost one ₹7.29 lakh ( ₹7.89 lakh with AGS). The top-of-the-line variant Creative gets a price tag of ₹8.49 lakh ( ₹9.09 lakh with AGS).

Nissan Mangnite that was launched last year in December, had an introductory price of ₹4.99 lakh with the cost of the top variant at ₹9.38 lakh (all prices are ex-showroom, Delhi). Till now, the SUV has undergone two price increases, earlier in April and the latest one coming into effect earlier this month.

Renault Kiger that was launched earlier this year, opened its books with the introductory price of ₹5.45 lakh (ex-showroom, pan-India). It has four variants - RXE, RXL, RXT, and RXZ and comes with two petrol engine options with a 1.0L naturally-aspirated motor and a 1.0L turbocharged engine.

The automaker increased the prices of the models after a few months of its launch. The latest prices RXE Energy MT and RXE Energy MT Dual Tone remain the same that is ₹5.45 lakh and ₹5.65 lakh respectively. However, the other variants observed a hike ranging from ₹3,000 to ₹33,000.

Both Kiger and Magnite do not have a diesel variant on offer.