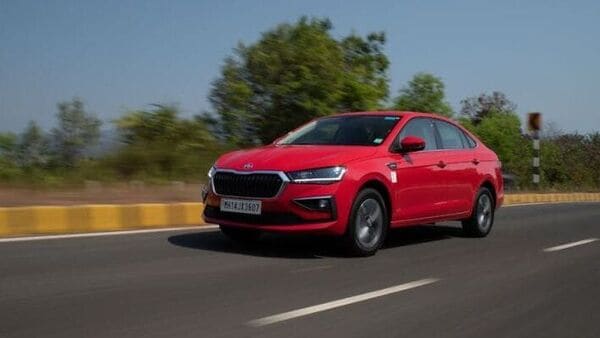 Skoda Slavia is the second car that the company has launched in India.

Skoda Auto India announced on Tuesday that it recorded a five-fold sales growth last month. The auto company sold 4,503 units in February compared to 835 units it sold in the same month last year. Skoda attributed its positive sales to the Kushaq SUV that it launched last year.

Skoda Auto India Brand Director Zac Hollis stated the company has started the year with a confident note. “Most importantly, this is not about merely selling more cars, it's about having more happy customers and fans of Skoda Auto in India," added Hollis. The Czech automaker's January sales figures also registered a three-fold increase and the numbers were mainly driven by Kushaq.

The company launched its mid-size Skoda Slavia sedan on Monday at a starting cost of ₹10.69 lakh. The top variant called Style in the range will be priced at ₹15.39 lakh and it will feature automatic transmission and a sunroof. The sedan is based on Skoda's MQB platform similar to the Kushaq SUV.

The sedan will be offered with a 1.0-litre TSI engine in choices such as Active and Ambition models. The top of the range, Style, will feature a 1.5-litre motor and will be launched on Thursday. The former engine can churn up power up to 113 bhp and a peak torque of 175 Nm while the latter can generate power of around 148 bhp and maximum torque of 250 Nm.

Skoda Slavia will rival the likes of Hyundai Verna, Honda City and Maruti Suzuki Ciaz. The company is aiming to sell around 3,000 units of the sedan each month. Skoda launched Kodiaq SUV at the start of the year that got sold out within 24 hours of its launch.