The Scram nameplate may be reserved for the upcoming Royal Enfield 350 cc Scrambler. Albeit, nothing has been officially confirmed yet.
By : Prashant Singh
| Updated on: 25 May 2021, 02:04 PM 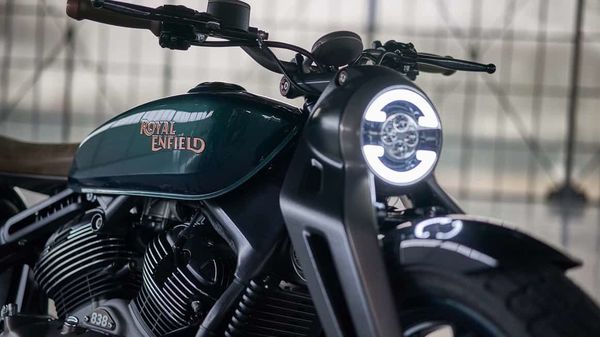 Royal Enfield has a range of motorcycles in the pipeline which are expected to break cover later this year. In the recent past, the Chennai-based retro bike maker registered the 'Shotgun' name which was said to be reserved for the 650 cc parallel-twin cruiser, and now the company has filed a patent for 'Scram' nameplate.

Needless to say, Scram may be a shorter version for Scrambler. Also, Royal Enfield is in fact developing a 350 cc scrambler-oriented model which until now is referred to as the Hunter 350. Chances are that it may be reserved for the very same 350 cc scrambler itself. Albeit, nothing has been officially confirmed yet.

Also, there are whispers hoping for a bigger capacity Himlayan to sit higher than the existing model. If rumours are true, Royal Enfield will utilise the same 650 Twins platform as the current Interceptor INT 650 and Continental GT 650 bikes, but even if a bigger Himalayan is under development it will most likely sit under the same 'Himalayan' nameplate range.

Thus, most likely, the Royal Enfield Scram may be a 350 cc model based on the J-platform as the Meteor 350 and 2021 Classic 350. In any case, it is still months away from the official debut as the patent was filed only recently.

On the other hand, the most immediate launch from Royal Enfield is going to be the new-gen Classic 350 which will go on sale in India later this year.