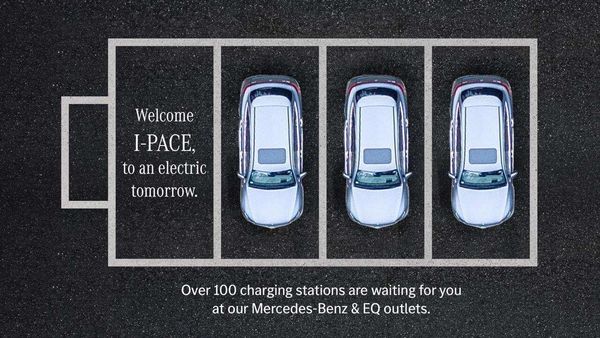 Here is how Mercedes welcomed Jaguar I-Pace to India.

They may be fierce rivals when it comes to conventional vehicles but in the nascent luxury electric vehicle segment, Mercedes and Jaguar are currently the only players in India. Jaguar I-Pace was launched here on Tuesday and becomes only the second offering from a luxury car maker in the country, after Mercedes launched EQC late last year. And the Germans decided to welcome the I-Pace with a subtle message about its charging infrastructure already in place.

The I-Pace will go head-on against EQC but most key players in the market agree that when it comes to EVs, more is likely better. "Welcome I-Pace to an electric tomorrow," the message from Mercedes reads. "Over 100 charging stations are waiting for you at our Mercedes-Benz & EQ outlets."

Thank you for the warm welcome.#FutureIsElectric

When it comes to EVs, the product is obviously the key but the supporting infrastructure is pivotal as well. OEMs mostly agree that an overbearing reliance on government(s) to ramp up charging infrastructure isn't advisable and have taken it upon themselves to build a network.

Both I-Pace and EQC are offered with a complimentary wall charging unit. While Mercedes has a lead among luxury car makers in expanding support facilities, Jaguar too has been busy by making 22 of its retail outlets EV ready.

Among the other key players who are lining up with their luxury EV products are Volvo and Audi. Volvo has confirmed plans of bringing in XC40 Recharge later this year, followed by C40 Recharge.

Audi is gearing up with its e-Tron. Speaking to HT Auto previously, Balbir Singh Dhillon - Audi India Head - had said that when it comes to EVs, more is merrier. (Read more here)

But all eyes would indeed be on Tesla as it closes in on its India debut. Its Model 3 is its most affordable product and while it may not be for the masses here because it may yet be priced upwards of ₹65 lakh, times for EV buyers sure are changing.