Actor Ranveer Singh himself owns a Lamborghini Urus in red colour that he had bought in late 2019.The high-performance luxury SUV comes equipped with a front-mounted, 4.0 liter V8 twin-turbo engine.
By : HT Auto Desk
| Updated on: 10 Mar 2021, 01:20 PM 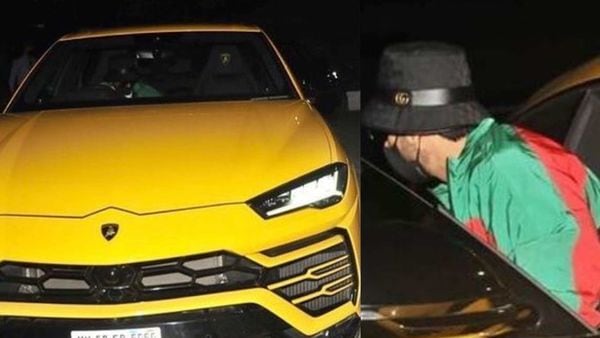 Bollywood actor Ranveer Singh was recently spotted driving a yellow Lamborghini Urus that belongs to director Rohit Shetty. The actor took the Urus out for going to a dubbing studio in Mumbai as he is reportedly currently working on Shetty's upcoming movie Cirkus.

Viral paparazzi photos and videos show the actor in the driver's seat, and making his way through a group of fans and photographers. He is then seen coming out of the Urus and posing for the cameras before he goes on to meet an elderly fan, and taking her hand out through a window, he plants a kiss on it.

Ranveer himself owns a Lamborghini Urus in red colour which he had bought in late 2019. He has been photographed driving the luxury car on several occasions. Apart from the Urus, he owns a bunch of other swanky luxury cars such as Mercedes-Benz GLS, Mercedes E-Class, Range Rover Vogue, Aston Martin Rapide S, Jaguar XJL and Audi Q5, among others.

The high-performance luxury SUV Urus was launched in India for the first time back in January of 2018 and the company recently delivered its 100th unit to a customer here. The car is imported to the country via the Completely Built Unit (CBU) route. It is priced at ₹3 crore (ex showroom).

The car comes equipped with a front-mounted, 4.0 liter V8 twin-turbo engine which produces 650 hp and has 850 Nm of torque. It can sprint from 0-100 kmph in just 3.6 seconds. The super sports car comes with six driving modes and multiple colour options.

Globally, Lamborghini had revealed the Urus to the world in December 2017 as the brand's first-ever SUV, which has now become a key player in the car maker's global product portfolio. Around 4,962 units of Urus were sold around the world in 2019.