Mercedes Vision EQXX is looking at taking on the might of some of the most capable performance electric cars, with a little help from the F1 experts.
By : HT Auto Desk
| Updated on: 04 Jan 2022, 11:00 AM 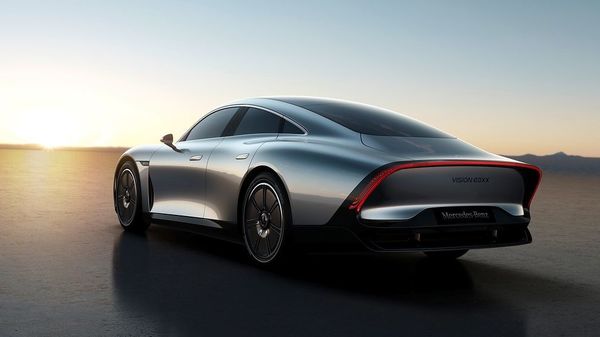 Mercedes Vision EQXX concept gets a sleek LED taillight expanding the whole width of the car. Also, there is a rear diffuser that gives a sporty and muscular stance to the luxury coupe.

Tesla has the pole position and is racing further ahead in the competition among electric vehicles but Mercedes is quite unwilling to remain far off in the rear-view mirror of the Elon Musk-led company. Doggedly determined to close the gap, the Germans have now reportedly brought in experts from its much-acclaimed Formula One team to help develop the Vision EQXX prototype which was unveiled on Monday.

The Vision EQXX concept is touted as the  most-efficient Mercedes ever developed and claims to have a range of 1,000 kms. Wieghing in at 1,750, this Mercedes concept also comes with ultra thin solar panels on the roof.

The battery itself has a new chemistry that has been developed with the assistance of F1 experts from Mercedes-AMG High Performance Powertrains division in the UK, reports Bloomberg. This battery weighs 30% less than the battery inside the EQS.

What is perhaps most significant is that unlike previous concept models showcased by Mercedes, the Vision EQXX concept is believed to be quite close to production. “This isn’t a show car but a protagonist for technology development," Markus Schaefer, Daimler’s head of development and procurement, was quoted as saying by Bloomberg. “Mercedes has worked hard in the last few years -- it’s our ambition to not only keep up but to be at the top of the game."

Mercedes aims to sell only fully battery-powered vehicles by 2030 ‘where possible’ and has confirmed massive plans to help it shift towards products that are zero emission options. While the likes of EQC and EQS have already been launched in select markets, there are a number of other options being tested or even near their respective launch dates.

But at a time when enthusiasts also question about high-performance electric vehicles, many manufacturers have been focusing on products that are ultra fast. Tesla Model S Plaid, for instance, claims to hit 100 kmph in just 1.98 seconds. To fend off challenge from such models, the Mercedes Vision EQXX could indeed see production in the times to come.