US media reported that the Golden Driller statue, first erected to honour the city's drilling history, has now been given a makeover - complete with Tesla written boldly on the belt buckle and with the company's logo brandished on the chest of the statue.
By : HT Auto Desk
| Updated on: 25 May 2020, 10:02 AM 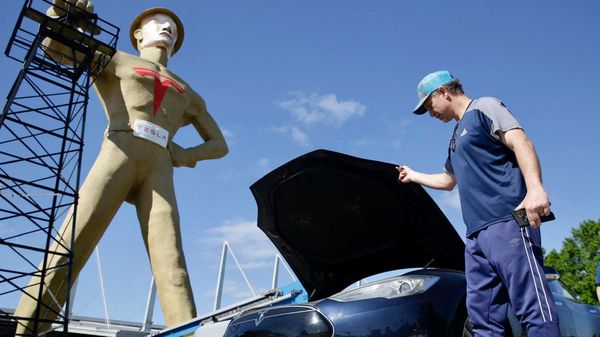 Andrew Nelson lifts the hood of his Tesla Model S in front of the Golden Driller. Tulsa's iconic Golden Driller statue is joining the effort to help lure automaker Tesla to build its new US assembly plant here.

Oklahoma city of Tulsa may not always make it to mainstream news like its bigger cousins across the United States but that is hardly a deterrent in its bid to get a Tesla factory within its jurisdiction area. Officials here recently painted a landmark 75-foot statue to make it look like Elon Musk in a possible attempt to attract the attention of the Tesla CEO.

US media reported that the Golden Driller statue, first erected to honour the city's drilling history, has now been given a makeover - complete with Tesla written boldly on the belt buckle and with the company's logo brandished on the chest of the statue. If that was not a sign of wooing Tesla and Musk, city mayour GT Bynum made his intentions - and adulation - amply clear in a tweet. "Tulsa is a city that doesn't stifle entrepreneurs — we revere them!" he wrote.

This could be a reference to Musk's recent clash with authorities in Alameda county in California over the resumption of operations at the Tesla plant. Matters had deteoriated to such levels that Musk had courted arrest, said he would re-open the plant without permission and even said he would pack up the facility and shift it to another state. Once US president Donald Trump stepped in in Musk's favour, authorities relented.

Tulsa is a city that doesn’t stifle entrepreneurs - we revere them! Golden @elonmusk is now the 6th-tallest statue in the United States. #TulsaforTesla @Tesla https://t.co/axyGvku4J9

Bynum, however, has gone on to claim that a partnership with Tesla could work wonders. "If @Tesla and #Tulsa team up to change the world, it would only be right to #BuyLocal," he tweeted.

Tesla factory in Fremont, Alamdea county in California is its largest anywhere in the world and boasts of 5.3 million square feet of manufacturing and office space on 370 acres of land. It employs around 10,000 people and Tesla claims stimulated $5.5 billion in sales activity and generated $4.1 billion in direct spending in the state in fiscal year 2017 alone.

Tesla is now looking towards completing its Gigafactory in Nevada and has claimed it would be the be the largest building in the world. It will supply lithium-ion batteries which, the company claims, could take the world towards sustainable energy in a quicker manner.

Little wonder then that Tesla factories are acclaimed for their massive scales and there is little wonder that Tulsa is now going the extra mile to woo the company as well as its CEO.