Ford's hands-free charging technology patent focuses on a device that would use the factory charge port just like a conventional charger but would essentially connect the charging port to the vehicle automatically.
By : HT Auto Desk
| Updated on: 07 Mar 2022, 01:42 PM 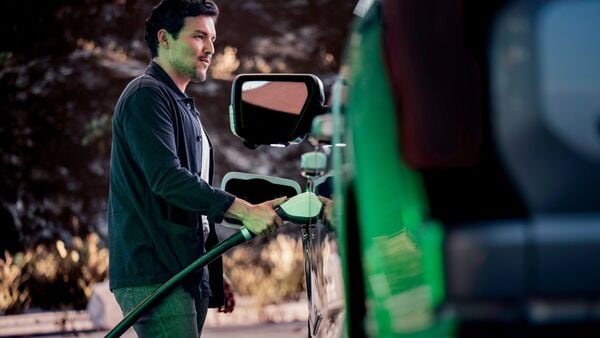 File photo of Ford F-150 Lightning being charged, used for representational purpose only.

A patent of hands-free EV charging technology filed by Ford Motor Company back in August 2020 has recently surfaced online after being published by the United States Patent Office on March 3 this year. The patented technology applies to both plug-in hybrids and fully electric vehicles.

As per the patent images posted online, it appears that the product might fold out from a normally compact position and would surely make charging vehicles a little easier for drivers if the car could simply be parked in a garage or at a station and connect itself to the charging source.

As electric vehicles become more mainstream, various manufacturers are working on building charging infrastructure as well as on innovative charging solutions. Michigan has greenlit a new Inductive Vehicle Charging Pilot program wherein a full mile of road with wireless charging capability built-in will be tested for charging electric vehicles. Indiana is also working on a similar program, while Volvo is testing wireless EV charging in Sweden.