Home Auto News Fire On Cargo Ship Carrying Porsches, Audis May Have Damaged All Vehicles Aboard

Fire on cargo ship carrying Porsches, Audis may have damaged all vehicles aboard

The vessel was carrying around 4,000 luxury cars from Porsche, Audi and Bentley and Lamborghini, all that belong to the Volkswagen Group.
By : HT Auto Desk
| Updated on: 22 Feb 2022, 07:27 AM 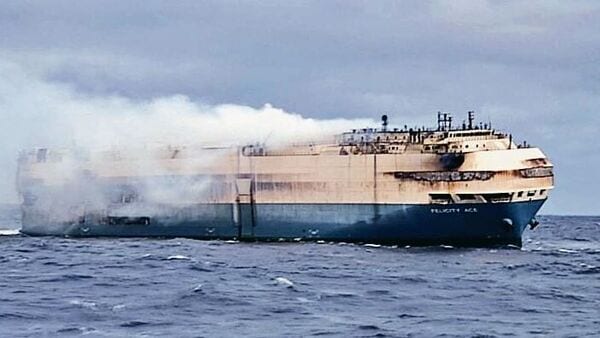 A fire broke out in the Felicity Ace’s cargo, forcing the evacuation of the crew. The vessel was carrying around 4,000 luxury cars from Porsche, Audi and Bentley.

Cargo ship Felicity Ace carrying more than 4,000 luxury cars that caught fire last week near the coast of Portugal's Azores islands, has lead to a loss of about $401 million worth of cars, as per the estimate of the Russell Group. The estimate has been made assuming that all vehicles on board the vessel were damaged due to the fire.

The vessel was carrying around 4,000 luxury cars from Porsche, Audi and Bentley and Lamborghini, all that belong to the Volkswagen Group. The carmaker is estimated to have suffered a damage of $155 million due to loss of its vehicles. The consultant group estimates that other auto companies may have lost about $246 million worth of vehicles.

The figures were given basis an estimate that out of the roughly $438 million total value of goods aboard the cargo ship, there were at least $401 million worth of cars. While it is still not clear what lead to the spark in the ship, it is believed that the lithium-ion component of the electric vehicles on board kept the fire alive for several days.

The operator of Felicity Ace - Mitsui OSK Lines Ltd, has mentioned on its website that two large tugs with firefighting equipment were expected to arrive on Monday morning local time for spraying water on them together with an initial salvage team that was on board already to cool down the ship. It has confirmed that no oil leakage took place and the vessel remains stable.

The Felicity Ace - which is roughly the size of three football fields - was on its way to a port in Davisville, Rhode Island from Germany’s Port of Emden when the fire broke on it last Wednesday, February 16. The 22 crew members on board the ship were evacuated the same day while firefighters kept struggling to shut down the fire, which finally died down on Monday, February 21.