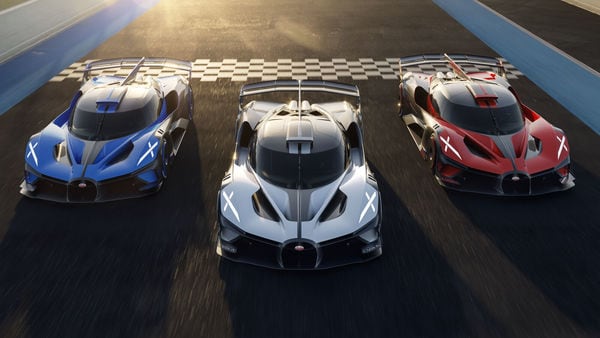 Bugatti is going to take the Bolide W16 concept model to production. Introduced in October last year as a one-of-kind experimental vehicle, the hyper sports car will no longer be a one-off vehicle. President of Bugatti, Stephan Winkelmann informed that the company will keep the production of this car limited to only 40 units. “The Bolide generated a great deal of enthusiasm and intrigue last year. Following its presentation, a significant number of enthusiasts and collectors asked us to develop the experimental Bolide as a production vehicle," he shared.

The Bugatti Bolide shares the same platform as the brand's one of the most popular models, Chiron. The production version will come with a powerful power train of the W16 engine with four turbochargers.

The luxury automaker shared that the design of the Bolide follows the minimalist approach of the Bugatti style philosophy of “form follows performance." The car sits very low to the ground with an air intake scoop on the roof. In combination with the striking rear diffuser, the dominant rear wing gives the car a high downforce and therefore resulting in optimum traction.

(Also read | This is the last Bugatti Divo in the world, wrapped in blue inspired by EB110)

Bugatti informed that in the experimental model, the usage of 110-octane racing fuel resulted in a power output of 1,850 PS, however, in the production version Bugatti opts for 98 RON gas which is available globally so that the owners can use their vehicles worldwide without any issues.

These production models will have a power output of 1,600 PS with 1,600 Nm torque at 2,250 rpm. Bugatti shared that the complete production will get over in the next three years and the deliveries are scheduled for 2024. Each Bugatti Bolide will cost € 4 million which is approximately ₹35 crore.