Home Auto News This Is The Last Bugatti Divo In The World, Wrapped In Blue Inspired By Eb110

This is the last Bugatti Divo in the world, wrapped in blue inspired by EB110

Only 40 units of Bugatti Divo has been produced for selected Bugatti Chiron customers.Bugatti has named the model after the French race car driver Albert Divo.
By : HT Auto Desk
| Updated on: 23 Jul 2021, 02:00 PM 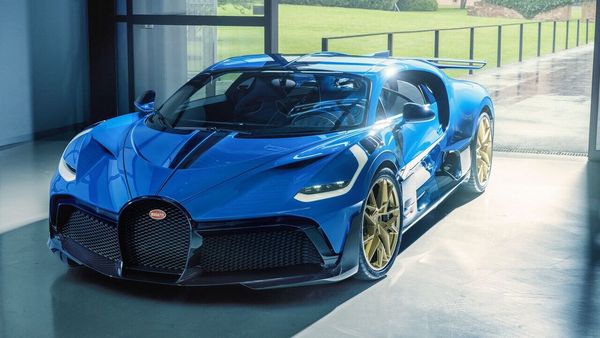 The last model of Bugatti Divo.

Bugatti has delivered the last Divo hypercar model to its owner in Europe. Bugatti achieved the landmark after almost three years since it introduced the Divo hypercar, a model based on the Chiron.

Bugatti Divo was introduced back in 2018. Only 40 units of the Divo hypercar have been manufactured by the carmaker. The last of them all has recently left the Molsheim workshops.

The exterior colour of the last Biggati Divo is a shade of blue reminiscent of the Bugatti EB 110 LM from the 90s, its last official Le Mans factory race car. The contrasting blue carbon gives it an exclusive look and the interiors are in French racing blue and deep blue complementing the exterior of the car.

The Divo has been designed in contrast with the Chiron to boost up its performance. Bugatti had modified and lengthened the chassis of the Chiron to develop the Divo hypercar, while optimizing the its aerodynamics and suspension to give it a more agile and precise handling. There was also a reduction in the total weight of the car, which is below two tons.

Bugatti Divo features additional air intakes and the new LED headlamps with boomerang daytime running lights. Under the hood, it has an 8.0-litre W16 turbocharged engine that is capable of delivering 1,500 hp of power and is coupled with a seven-speed dual-clutch gearbox. Thanks to its all-wheel drive, the hypercar can sprint from zero to 100 kmph in just 2.4 seconds and overall, its performance completely outperforms the Chiron. The Divo has a top speed of 380 kmph.

The rear of the car has a complex 3D rear light as part of the rear grille, while a raised diffuser makes it look wider. Director of sales and operations Hendrik Malinowski informs that the design of Bugatti Divo received a positive response during the time of its making. “The 40 vehicles had all been sold within a matter of weeks following the first customer appointment," he notes.

The 40 Divos models are not identical to each other. Many of the Divo customers opted for one-off production and chose the colours and materials themselves. This included paintwork, leather and stitching. The customers also contributed their design ideas hence, Bugatti says, Divo is bespoke. The model has been named after the French race car driver Albert Divo.