All-electric BMW MINI Cooper SE Convertible is packed with a 137 kW electric motor capable of generating a power output of 184 hp. It is a one-off model and won't enter production cycles.
By : HT Auto Desk
| Updated on: 15 Jul 2022, 12:17 PM 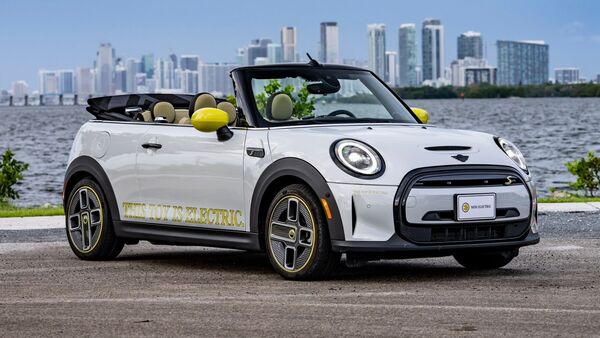 BMW MINI has introduced an all-electric convertible version of MINI Cooper SE. BMW informs that this is a one-off model and will not be a series production car. The luxury automaker shares the four-seater MINI Cooper SE model is the world's only premium convertible with a fully electric drivetrain in the small car segment. BMW will showcase this electric vehicle at a community event in the US.

The new all-electric BMW MINI Cooper SE is 3,863 mm in length with a wheelbase of 2,495 mm, a width of 1,727 mm and a height of 2,495 mm. The load volume in the luggage compartment remains unchanged. The EV uses the same drive components as the three-door MINI Cooper SE. This convertible, all-electric MINI Cooper SE is packed with a 137 kW electric motor capable of generating a power output of 184 hp. It offers a range of 230 km which has been determined in the WLTP test cycle. The one-off electric vehicle can touch the speed of 100 kmph from absolute zero in 7.7 seconds.

BMW informs that the fully electric and textile soft top of the electric MINI Cooper SE can be opened and closed within 18 seconds. One can, at the touch of a button, activate the soft top when driving up to 30 kmph and allow three settings, open, closed or as a sunroof.

According to a Motor1 report, BMW MINI is also in the process of building a new generation of electric Cooper. Reportedly this new model will not have anything similar to its ICE version. It may come with a longer wheelbase and can be smaller in length. It is being suggested that it may create power output up to 200 hp.