Each turbine at the BMW facility is evenly illuminated by the eight powerful LED lights that surround them and are powered by electricity from the turbines themselves.
By : HT Auto Desk
| Updated on: 20 Dec 2020, 04:46 PM 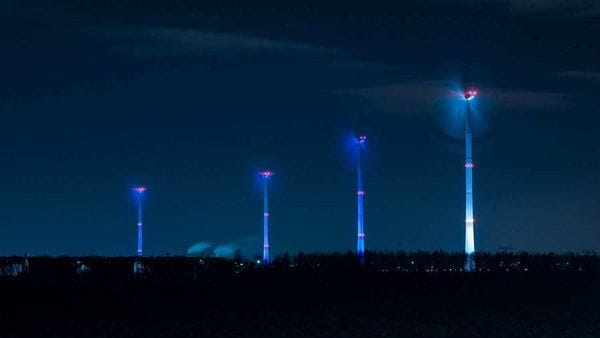 The four wind turbines on the grounds of BMW's Leipzig plant have been given a new task this Advent, which started on November 29 and will go on till December 24. They have been lit up in white rather than the usual blue, symbolizing the candles of the first season of the Church year, leading up to Christmas.

These wind turbines have been generating green energy for BMW i production since 2013. At 190 metres high and with nominal power of 2.5 megawatts each, the turbines generated a combined total of 26.4 gigawatt hours of electricity purely from wind in 2019 – enough to power more than 5,000 three-person households for a year. Each turbine is evenly illuminated by the eight powerful LED lights that surround them and are powered by electricity from the turbines themselves.

The turbines provide about one fifth of all the electricity used at the Leipzig plant. When production is not running, they power other areas of the facility and ensure the base load is covered. They also supply energy to the BMW Battery Farm, which is also located on the site. The battery farm comprises up to 700 interconnected high-voltage BMW i3 batteries and has been in operation since 2017.

BMW says the use of green energy produced by the wind turbines symbolize the company's commitment to sustainability. Production at the Leipzig plant has been powered with carbon-neutral energy since 2018. All the energy supplied by providers comes from renewable sources.