The Bajaj Auto factory affected is located in western Maharashtra, the state with the highest number of cases of Covid-19, the disease the virus causes.
By : Reuters
| Updated on: 05 Jul 2020, 16:27 PM 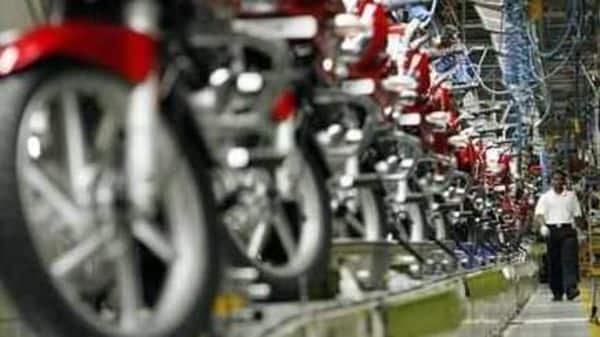 A worker walks beside newly built motorbikes at the Bajaj Auto Ltd. plant in Pune, about 130 km (82 miles) from Mumbai.

Workers at Bajaj Auto, India's biggest exporter of motorbikes, are demanding the temporary closure of one of its plants after 250 employees there tested positive for coronavirus, its unions said on Saturday, as companies struggle to ramp up operations.

India went into complete lockdown in late March to curb the spread of the virus but it has recently eased restrictions despite the number of cases surging, putting some companies in a difficult position as they try to revive production.

The Bajaj Auto factory affected is located in western Maharashtra, the state with the highest number of cases of Covid-19, the disease the virus causes. The company said in a letter to employees this week that those who do not show up for work will not be paid.

"People are scared to come to work. Some are still coming but some are taking leave," said Thengade Bajirao, president of the Bajaj Auto Workers' Union.

The company said on June 26 that 140 of the roughly 8,000 staff at the factory had caught the virus and two had died.

It said work there would not be stopped, however, as the company wanted to learn to "live with the virus".

An official in Aurangabad district, overseeing the Waluj area where the plant is located, said the number of cases had now gone up to more than 250.

Bajaj Auto did not respond to Reuters' requests for comment.

On Saturday, India reported a record number of more than 22,000 daily cases of infection, taking the nationwide total to more than 640,000.

"We requested the company to temporarily close the plant for 10-15 days to break the cycle but they said there is no point as people will continue to gather for social events outside of work," the Bajaj union's Bajirao said.

For every employee testing positive, four who work close to them have to be quarantined, affecting productivity, he said.

With an annual production capacity of over 3.3 million motorbikes and other vehicles, the Waluj plant accounts for more than 50% of Bajaj's manufacturing volume in India.

"If an employee remains absent at office or plant due to any reason despite being asked by the company ... then his/her salary would be deducted 100% during the period," Bajaj said in the letter to employees.

In May, Chinese smartphone maker OPPO suspended operations briefly at a plant near New Delhi after some workers tested positive.

Workers and union leaders say Bajaj has taken steps to ensure social distancing on the factory floor and in its cafeteria, besides arranging separated seating on its buses and providing masks and sanitisers for staff. But they say this is not enough.

"On the assembly line, multiple people touch the same engine. We were wearing gloves but still caught the virus," said one worker who was in hospital after testing positive for Covid-19.