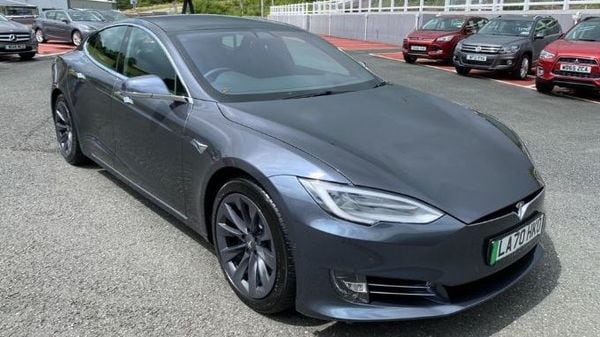 Tesla's top of the range Model S electric vehicle that was once used by UK's Prince Charles has gone on sale. The Tesla EV is only six-month-old and has only clocked 7,000 miles, that is around 11,265 km. It will be available in the market for £82,500 (approximately around ₹85 lakhs). No special premium has been added for its usage by the Royals.

It is suggested that the electric vehicle was loaned by Tesla to the Prince's household to try it out in addition to his electric Jaguar I-Pace, DailyMail reported. The Prince, known for his environmentally-friendly views, has been chauffeured around in the silver-coloured Tesla Model S that has a top speed of 249 kmph. The electric car has a range of 651 km and reaches the speed of 96 kmph in mere 3.1 seconds.

Prince Charles loved the electric vehicle so much that he got the loan period extended before handing it back to Tesla, the report stated. In fact, the electric car might get an owner soon as currently, anyone ordering a new Tesla Model S in the UK may not get the delivery until the end of next year. The Model S was recently bought by webuysupercars.com and is now being sold by luxury car dealers Castle Motors.

(Also read | Tesla's $400 million camera deal with Samsung could be for Cybertruck: Report)

Tesla also recently launched the Tesla Model S Plaid which the EV maker claims to be the fastest car in the world. Elon Musk has said that the EV is faster than a Porsche and safer than a Volvo. The Model S Plaid, with 1,020 horsepower, can touch the speed of 96 kmph in less than two seconds. Tesla also boasts that the new electric car has a top speed of 321 kmph. The new Model S has been launched at $129,990 (approximately ₹95 lakh).