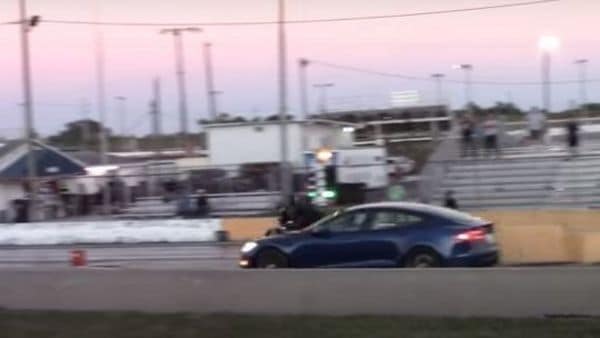 Tesla Model S Plaid is currently the fastest accelerating sedan in the world. Since its introduction, automotive enthusiasts, EV evangelists have gone gaga about this electric luxury sedan. This is not the first time Tesla Model S Plaid was pitted against another vehicle for a drag race. However, this was the first time, this electric sedan was put on test against an electric motorcycle.

The race was not exactly a quarter-mile drag race, but despite that, the Tesla Model S Plaid had enough track left to easily walk around the Harley. The Tesla clocked a 6.1 at 191 kmph, while the Harley-Davidson Livewire recorded 7.27 at 156 kmph. The Livewire started with a slight edge thanks to the instant torque, but within a fraction of seconds, it was beaten by the Tesla. The bike had no time to build up power before the Model S Plaid was gone.

The all-electric motorcycle weighs around 249 kg, which is around 45 kg heavier than many premium-high performance bikes. However, the weight is much below that Tesla Model S Plaid that scales at 2,161 kg. This huge weight difference makes the race between these two machines more interesting.