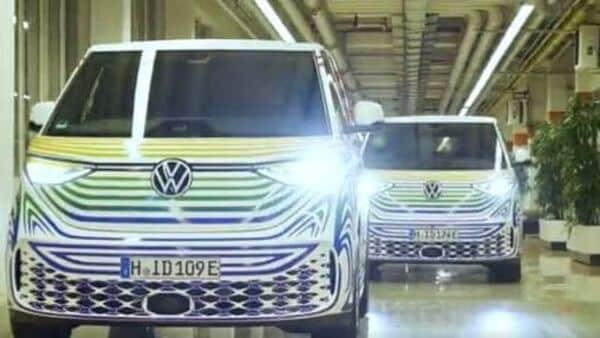 German automobile major Volkswagen is readying for the public debut of its much-awaited Volkswagen ID. Buzz. The automaker earlier this week announced on Twitter that it will showcase a cargo van variant of the EV alongside the passenger model at the SXSW festival in the US.

Volkswagen ID. Buzz is a renewed all-electric iteration of the iconic microbus. The electric vehicle comes based on the MEB architecture and it shares several components with the ID.3 and ID.4, which are already on sale.

Volkswagen ID. Buzz will come available in both standard and long-wheelbase variants. The automaker plans to launch the standard variant in the European markets and the LWB variant in the US. The ID. Buzz comes as one of the key models for the brand's product strategy and it is also one of the most awaited electric vehicles in the global EV space.

Volkswagen ID. Buzz is expected to be available in both single and dual motor configurations. This means the EV will come with an all-wheel-drive technology as an option. The pure electric microbus will come with battery options ranging between 48 kWh and 111 kWh. This will result in the Volkswagen ID. Buzz offering a cruising range of up to 550 km on a single charge. Volkswagen is also likely to bring an AWD variant of the ID. Buzz that will churn out 400 hp of peak power output.

While the electric microbus is now being dubbed as ID. Buzz, the production model meant for being sold to the public is likely to be named differently. However, it would carry an ID lettering in the nomenclature, as ID signifies the German automaker's dedicated electric vehicle wing. Volkswagen is expected to start selling this pure electric vehicle from 2023 or 2024.