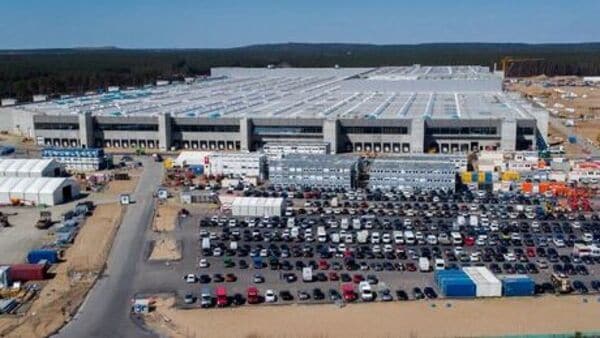 Tesla Gigafactory for electric cars in Gruenheide near Berlin, Germany.

Tesla is reportedly hiring 500 to 600 people every month at its Gruenheide manufacturing facility. The EV giant is also reportedly working with Germany's national employment agency to recruit workers who are no longer required at German automakers plants, revealed the country's regional economy minister of Brandenburg Joerg Steinbach.

Automotive News Europe has also reported that a total of 4,100 to 4,500 staff have been already recruited at Tesla's Giga Berlin manufacturing plant. Among them around 10 per cent of the workers are foreigners, primarily from Poland, the report reveals further.

Speaking about this, Steinbach further said that car manufacturers in other regions have been realizing that the production of electric cars requires fewer people than had in past for the internal combustion engine vehicles. This evolving situation is claimed to be helping the Brandenburg region, claimed the minister, as the companies like Tesla are trying to bring those workers to the region.

Tesla's Gruenheide EV plant has been running on two shifts since May 23. A third shift is due to start before the end of the year, the minister further added. This revelation comes at a time when Tesla CEO Elon Musk earlier in June this year said that the EV manufacturer would reduce its salaried workforce by 10 per cent. He also said that Tesla has become overstaffed in many areas. However, Musk later said on Twitter that the hourly headcount at the automaker's plants would increase.

Tesla's Berlin Gigafactory comes as the second such plant outside the US, after the Gigafactory in Shanghai. The Tesla Giga Berlin caters to the demand of Germany and the rest of the European market. Currently, this facility is producing Tesla Model Y crossovers and has a plan to start production of Model 3 in future. With the new hirings, Tesla seems to be aiming to boost its production volume further in an attempt to reduce the waiting period for the customers who have booked the cars.