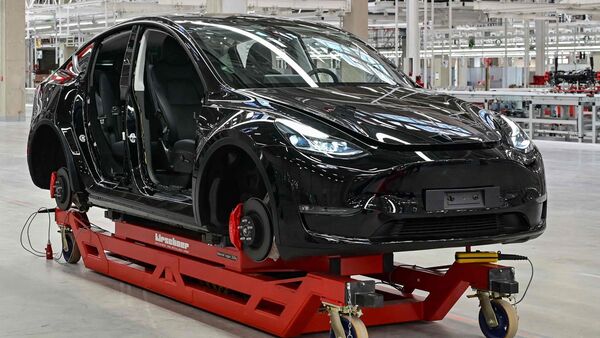 A Tesla Model Y at the Tesla Gigafactory in Gruenheide, near Berlin.

Tesla CEO Elon Musk back in 2020 promised that the Giga Berlin plant of the EV maker will have the world's most advanced paint shop. However, it seems Musk was not telling the truth, as Tesla's Giga Berlin factory is only rolling out black and white Model Y electric crossovers. The automaker is offering these two colour options to the Model Y EV buyers in Europe, reports German publication Automobilwoche.

The report also claims that the customers who order the Tesla Model Y in Solid Black or Pearl White Multi Coat paint theme options can expect to have their vehicle delivered in October this year. However, customers who prefer other colour options like Red, Blue or Silver will have to wait until March next year. Also, in their cases, Tesla will deliver the Model Ys made in China at the Shanghai Gigafactory.

This move of Tesla comes as a surprise as the automaker was supposed to roll out different exterior colour options for the made-in-Germany cars, as indicated by Elon Musk two years ago. He promised the Giga Berlin's paint shop would be the world's most advanced paint shop, with more layers of stunning colours that subtly change with curvature.

The report further hints that there have been problems at the paint shop since the factory started production in March this year. However, no details have been revealed by Tesla so far. Meanwhile, Tesla's German factory will take a planned break of 12 days starting this week, in order to optimize the manufacturing process. The main objective of this overhauling measure is to ensure car bodies only spend 45 seconds at each manufacturing station, instead of the current 90 seconds. This will help the automaker to boost the speed of production at the factory and move to a three-shift operation. This strategy will cover the paint shop operations as well.