Tata Motors has already ordered a ‘detailed investigation’ into the incident of a Nexon EV catching fire in Mumbai on Tuesday. The video of the incident, which was shared across social media platforms, has gone viral.
By : HT Auto Desk
| Updated on: 24 Jun 2022, 08:20 AM 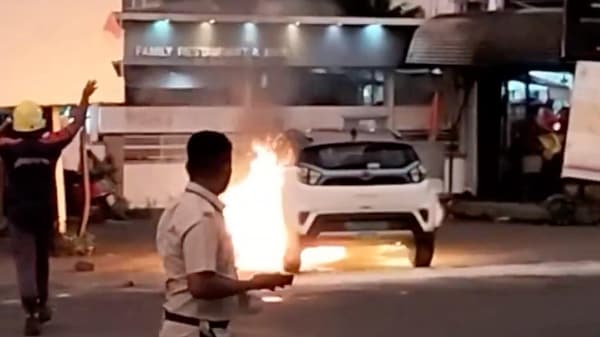 A Tata Nexon EV was damaged in a fire incident in the Vasai area in Mumbai on Tuesday. (Image courtesy: Twitter/@KamalJoshi108)

The EV fire incident in Mumbai on Tuesday has prompted the Centre to swing into action. It has ordered an independent enquiry into the incident in which a Tata Nexon EV caught fire in Mumbai on Tuesday. The government's decision to hold an investigation came hours after Tata Motors announced that it will hold a ‘detailed investigation’ into the incident on Thursday. A video of the Nexon EV fire incident, which was shared on social media, went viral prompting actions from various stakeholders. No one was injured in the incident.

According to an official in the Ministry of Road Transport and Highways, the Centre has roped in the Centre for Fire Explosive and Environment Safety (CFEES), Indian Institute of Science (IISc) and Naval Science & Technological Laboratory (NSTL) in Visakhapatnam to conduct the investigation. These agencies will try to ascertain the reason and circumstances that led to the incident and also suggest remedies to avoid such occurrences in the future.

Earlier, on Thursday, Tata Motors had issued a statement saying that it has ordered a thorough internal investigation into the Nexon EV fire incident. The carmaker said, "A detailed investigation is currently being conducted to ascertain the facts of the recent isolated thermal incident that is doing the rounds on social media. We will share a detailed response after our complete investigation. We remain committed to the safety of our vehicles and their users."

Tata Motors currently leads the electric vehicle race in India with more than 80 percent market share in the four-wheeler passenger vehicle segment. In its statement, Tata Motors reminded that the Nexon EV fire incident is a first in nearly four years. The statement read, "This is a first incident after more than 30,000 EVs have cumulatively covered over 100 million km across the country in nearly 4 years."

EV fire incidents in recent times has raised questions over the safety parameters with lithium-ion batteries in India. Previously, the electric two-wheeler segment has seen several incidents involving scooters from Ola Electric, Okinawa Autotech and PureEV among others. A few were forced to recall their scooters after at least six people were killed in such incidents. The Centre is conducting a separate probe into the EV two-wheeler fire incidents. The panel is expected to submit the report this month.