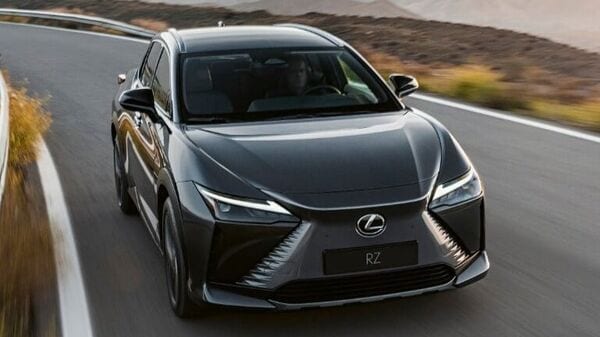 The Lexus RZ 450e is one among the two EVs the Japanese luxury car brand currently sells.

Toyota-owned luxury car brand Lexus aims to sell 10 lakh electric vehicles annually by 2030, claims a report by Automotive News. Currently, the Japanese luxury car marquee sells two electric vehicles, with one of them being a bespoke EV. However, the company aims to increase its pace in the EV segment with an increased number of electric vehicles in order to achieve its target of selling 10 lakh models every year by the end of this decade.

Lexus' current EV portfolio includes the front-wheel-drive UX 300e with a 54.3 kWh battery pack and the new RZ 450e, which draws energy from a 71.4 kWh battery pack. The RZ 450e is built on the Toyota group's e-TNGA architecture.

Lexus has created a dedicated new division called Lexus Electrified, which is focused on developing electric cars. The wing was introduced back in 2019, while Lexus also introduced a series of design studies hinting at a new range of sporty electric cars. First of them is expected to come as a spiritual successor of the original Lexus LFA, previewed by the Electrified Sport concept.

Lexus' target to sell 10 lakh electric cars every year by the end of this decade is an ambitious projection, but it is a really challenging task for the company. Takashi Watanabe, the chief engineer of Lexus Electrified, said that it is an extremely difficult challenge to shift everything to battery electric vehicles and maintain a sustainable business. “We need to reduce the cost of the battery and innovate the entire car manufacturing process," Watanabe further added.

He also pointed out another difficulty Lexus is facing. The auto company is finding it challenging to set up its manufacturing plant for future electric vehicles, where the EVs and their underpinnings would be shared with Toyota. The report also claims that Lexus is considering building new factories for its new electric vehicles in the same location where it currently produces hybrid vehicles.