BMW design boss Adrian van Hooydonk said the visual similarity between i7 and 7-Series comes as a deliberate choice.
By : HT Auto Desk
| Updated on: 29 May 2022, 10:44 AM 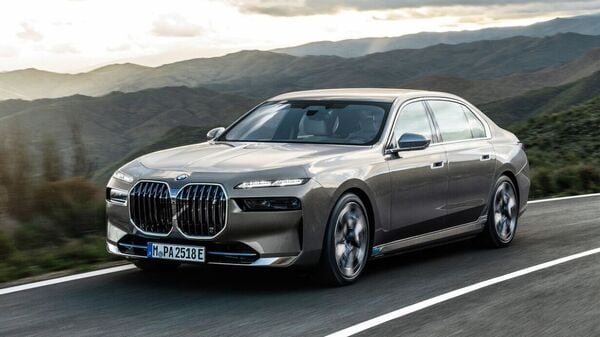 BMW i7 luxury sedan appears similar to the 7-Series.

German luxury car marquee BMW has made the visual appearance of the i7 electric sedan very similar to the 7-Series sedan. This comes as a contrasting strategy compared to the approach of rival companies such as Mercedes-Benz and Audi toward their respective electric cars. Also, this strategy is repetitive for BMW, as it has developed the iX3 SUV based on X3 and the i4 sedan on 4-Series Gran Coupe.

Speaking about the strategy BMW design chief Adrian van Hooydonk has said to Autoblog that this design strategy was adopted deliberately by the automaker. “That was a deliberate choice. We feel that electric mobility is going to happen but nobody knows how quickly. So, we felt that if we were to combine luxury and electric in one vehicle, that would be beneficial because, otherwise, in the near future we might force our customers to make an uncomfortable choice," he further added.

While commenting on the design philosophy of the automaker, Hooydonk also indicated that the electric sedan cannot offer a similar level of comfort and spaciousness as the ICE equivalent.

However, Hooydonk didn't indicate whether the future BMW electric cars will adopt the same design philosophy. But, the i3 Drive 35L that has been recently unveiled in China, looks very much identical to the BMW 3-Series.

The automaker is currently focusing on its Neue Klasse platform which is the dedicated architecture developed for electric vehicles. Slated to debut in 2025, this platform will allow the automaker to differentiate the electric cars from their ICE or hybrid counterparts.