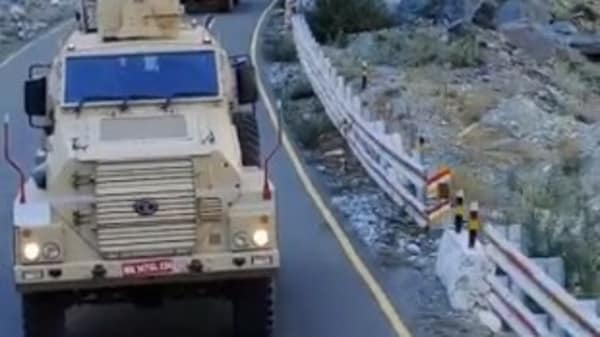 Tata Advanced Systems, a defence product manufacturing company under the Tata Group, has delivered a fleet of indigenously built Quick Reaction Fighting Vehicles (QRFV) to the Indian Army. The company has released a video on its social media platform showing a fleet of QRFVs moving through mountain terrain. While the exact number of units delivered has not been revealed, the video shows at least 10 of these vehicles. Also, the company has not revealed where the vehicles have been delivered.

The Tata QRFV is an armoured personnel carrier with mine protection and it comes in 4x4 configuration. The vehicle is developed to serve as a mine-proof troop transport vehicle. It is used by law enforcement forces as a special response vehicle to counter insurgency. Tata Advanced Systems claims that this can be used as an escort protection vehicle as well. These vehicles are claimed to be in service in various peacekeeping missions around the world as well as with the Indian security forces across the country.

The manufacturer claims that these vehicles come with Stanag Level 4 blast protection offering protection from explosives of 14 kg and 21 kg. The vehicle can carry a total of 14 crew including the driver. The vehicle can carry a payload of up to two tons. It churns out 240 hp peak power. The run-flat inserted tyres ensure mobility across all terrains. Other features include ten firing ports and a 360-degree rotating turret on the roof.

(Note: The exact specifications of the QRFV units delivered to the Indian Army are not known because of the sensitive nature of operations that these may be tasked to carry out. The details are as mentioned on the manufacturer's website.)