Watch: Leopard hit by a car on the highway, escapes severely bruised

The video reveals a leopard stuck under the bonnet of a Maruti Suzuki Celerio on a highway, with the car's front profile badly damaged.
By : HT Auto Desk
| Updated on: 21 Jun 2022, 02:13 PM 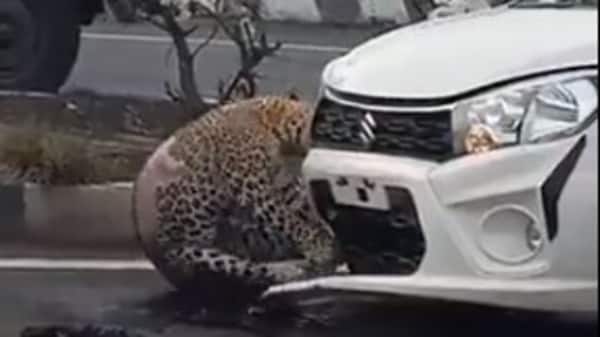 A disturbing video has surfaced online showing a fully grown leopard stuck under the bonnet of a Maruti Suzuki Celerio on a highway. Half of its body seems to be beneath the car's bonnet. The video also reveals how the car's front profile has been damaged due to the impact and the severely bruised back of the big cat. At the end of the video, it is seen the car reverses and the leopard manages to escape ending its struggle. The leopard is seen jumping from a wall on the opposite side. The incident reportedly took place in Chandanpuri ghat, Pune-Nashik highway (NH50), Maharashtra.

Since the video was posted online, it became viral and many netizens requested Union Minister for Road Transport and Highways Nitin Gadkari to take necessary actions so such incidents don't happen on national highways. According to many, the incident is a result of bad planning, which can is causing danger for both the passing animals and making the roads unsafe for citizens as well.

Many national highways across India run through forests, endangering many animals as well as the passing vehicles and their occupants as well. The death of animals due to impact with a passing vehicle is nothing new. Also, many vehicles also face mishaps while impacting the road crossing animals. The latest video too comes as one of them.