The VW T-Roc Cabriolet comes out as the first convertible SUV from the German automaker.
By : Prashant Singh
| Updated on: 04 May 2020, 18:11 PM 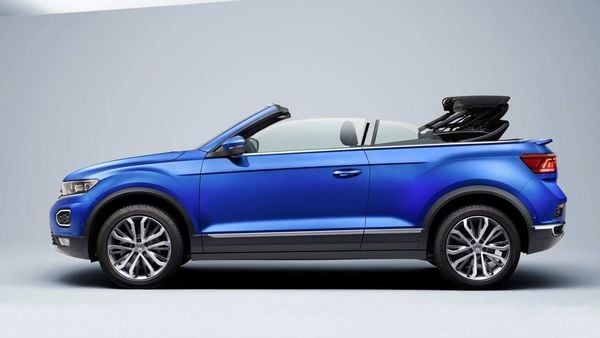 Volkswagen previously launched the T-Roc in the India last month, now the 'open-top', VW T-Roc Cabriolet has made its debut in its home market. It has been priced at EUR 27,495 or ₹22.75 lakh.

The VW T-Roc Cabriolet comes out as the first convertible SUV from the brand. It features a fully automatic soft top which can be controlled with a central switch on the centre tunnel or via an optional remote control key. It also gets an optional wind deflector.

As per the official claims, the soft top opens up under 9 seconds at up to speeds of 30 kmph. Closing procedure takes around 11 seconds. The car features an electromechanical lock system for the soft roof.

The company has taken special care of safety in case of an accident involving car rollover. It comes kitted with a safety system which includes two thick panels behind the headrests which pop out instantly as soon as sensors detect that the vehicle is exceeding a certain tilt angle or a defined transverse acceleration. Apart from that, the car gets reinforcement tubes in the A-Pillars as well as in the windscreen frame for added security. It also gets convertible-specific floor reinforcements.

Being a more premium offering in comparison to the regular T-Roc, it benefits from the company's new Modular Infotainment Toolkit (MIB 3). This system features new advance processors and as well as eSIM which keeps the vehicle online permanently.

There are no confirmed plans of the VW T-Roc Cabriolet to arrive in India anytime soon.