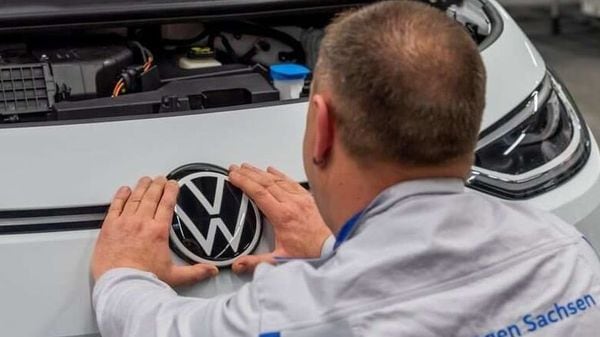 File Photo: An employee fixes a VW badge at a production line for the electric Volkswagen model ID.3 in Zwickau, Germany. (Representational Image)

The German car industry is readying proposals for a new cash-for-clunkers program to counter a sales slump that risks choking off production restarts at factories across Europe’s biggest economy.

The state premiers of Lower Saxony, Bavaria and Baden-Wuerttemberg, home to Volkswagen AG, BMW AG and Daimler AG, are expected to consult this week on a joint strategy ahead of a meeting with federal government leaders scheduled for next week.

While Chancellor Angela Merkel’s government has fast-tracked more than 1 trillion euros ($1.1 trillion) in aid to help the German economy through the coronavirus crisis, calls to hand more taxpayer money to the automotive industry have stoked political controversy. A key sticking point is how sizable the state aid should be, given that the car giants raked in billions of euros in profits last year. And while industry executives would like to see the stimulus apply to all new models, the government may limit aid to just the cleanest cars.

New incentives “won’t look like the cash for clunkers program" that boosted auto sales during the financial crisis, Economy Minister Peter Altmaier said Wednesday in Berlin. Instead, measures should be “ecologically sustainable" and help reduce carbon dioxide emissions, he said.

VW works-council chief Bernd Osterloh gave a first glimpse of how a new program could look in a letter he sent to employees on Wednesday.

Germany’s vehicle tax should be designed to encourage purchases of fuel-efficient cars, and any additional tax revenue could be used to build more electric charging stations, he said, according to the letter seen by Bloomberg. Additionally, the government could prepare a scrapping program for older vehicles, with support restricted to cars that meet the latest Euro 6d temp emission rules.

All major German automakers would support such plans and could consider doubling the buying incentives, according to the letter. Manufacturers would also grant options to test-drive electric cars for 14 days in 2021 for free.