Volkswagen Tiguan AllSpace has its priorities carved out clearly and focuses on a premium cabin with a comfortable drive experience.Tiguan AllSpace is offered with a 2-litre TSI petrol engine and there's no diesel option.
By : Shubhodeep Chakravarty
| Updated on: 25 Nov 2020, 09:43 AM Volkswagen Tiguan AllSpace is offered in a petrol engine option with the promise of a stately drive and ride experience. (HT Auto/Sabyasachi Dasgupta)

Volkswagen had driven in Tiguan SUV in India back in 2017 with the promise of a refined drive experience and a premium cabin to back it up with. It may have been a solid offering based on these promises but it managed to find a liking among only a niche SUV-buying audience. It didn't look macho like some of the rivals it went up against and space inside wasn't much to write home about either. The German car maker, known for the solid build quality of its offerings, stretched its dreams and stretched the car to bring in the Tiguan AllSpace earlier this year. The promise this time around? The same refined drive experience in a petrol-exclusive offering which now has a whole lot more space for passengers and luggage-storing options.

With an addition of 110 mm in its wheelbase over the Tiguan, the Tiguan AllSpace looks at validating its new name while hoping that the addition of third-row seats makes it appear a practical option for those with larger families.

I got around to driving the Tiguan AllSpace for two days in and around Delhi and while I kept my family safely back home considering the Covid-19 situation, loaded two empty suitcases and my cycle to see just how practical this SUV is when it comes to packing up and getting a move on. 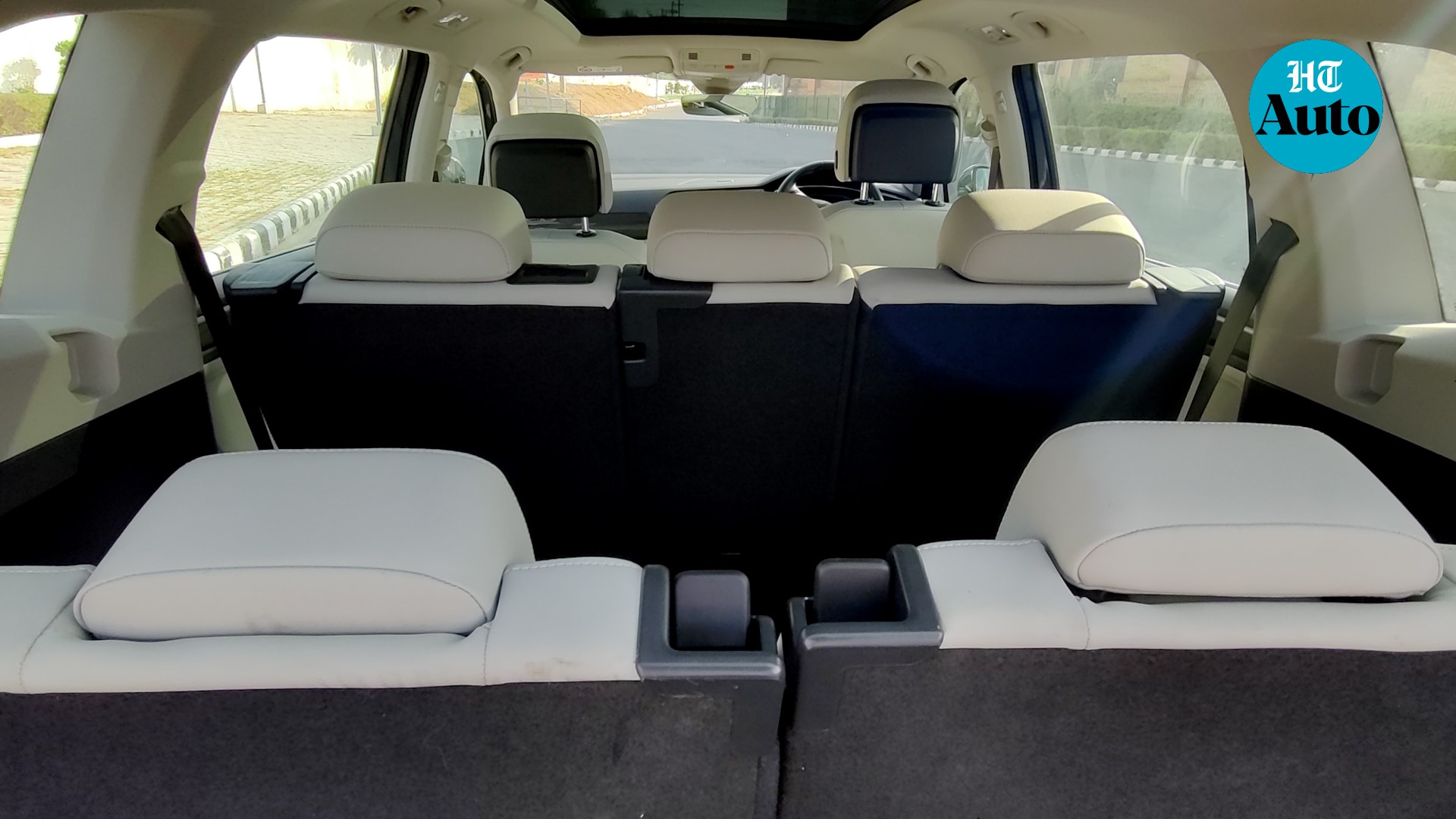 The biggest change between Tiguan and Tiguan AllSpace is that the latter offers three-row seating arrangement. (HT Auto/Sabyasachi Dasgupta)

Quite obviously, it is imperative to primarily focus on the space inside the Tiguan AllSpace which now boasts of seats in three rows. The first two rows are as premium, as refined and as comfortable as ever and Volkswagen continues to add a touch of elegance to the fit and feel of materials here. The cabin of my review unit had a white and black colour theme which further upped the premium quotient of the vehicle. And while the all-black theme which is also available doesn't appear as elegant, it would be easier to maintain. After all, despite all the care I sought to take, the seats did get a few scuff marks from the cycle tyres.

Speaking of the cycle, it was easy to hoist it in the Tiguan AllSpace - thanks to a manageable load lift, and with the middle and last row seats down, there was still some space left for additional bags on the sides. Now this is for reference purpose only and while my cycle also fits in the compact SUV from a certain Korean car brand that I own, here there isn't space left for much else. And that's where the space quotient of the AllSpace is at. Sure, you won't be able to pack in big suitcase over the cycle inside the Volkswagen SUV - not unless you want to risk damaging the cycle. But that you can store shopping bags, shoulder bags and other knick-knacks is indicative of space available for luggage.

Since I also had two empty suitcases to test the storage space with, I took out the cycle, rolled all seats to the upright position and gave the space another test. With all three seats up, only one 28-inch suitcase - or two 20-inch cabin suitcases - would fit in the boot. Roll down the last row seats and the options are quite limitless.

And you might as well keep the last-row seats down. 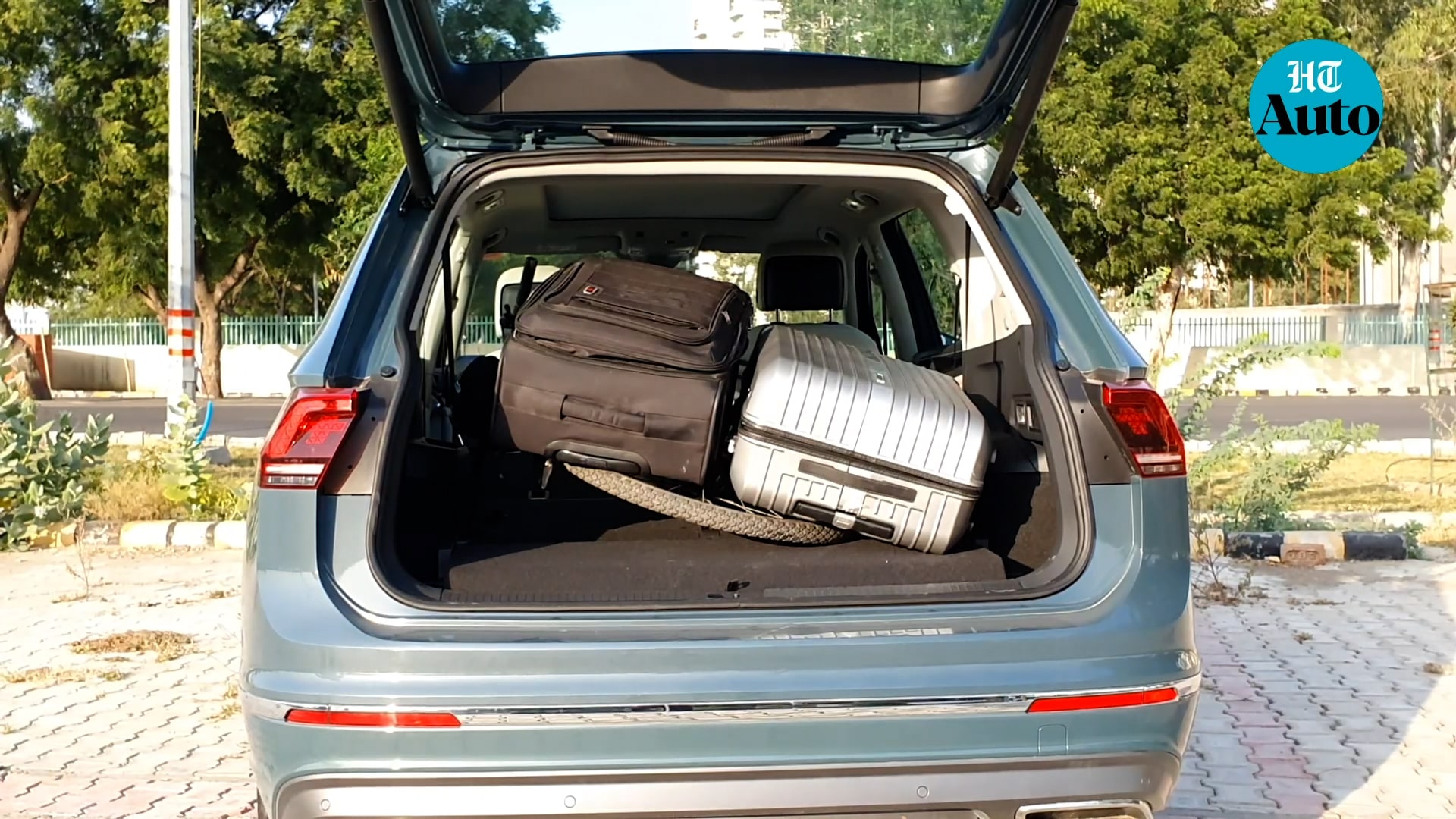 Tiguan AllSpace can gobble up most of everything if the middle and last-row seats are folded down. (HT Auto/Sabyasachi Dasgupta)

The third-row seats are woefully cramped for adults and perhaps even inadequate for most children. Reaching these seats is more like an expedition and exiting similar to Yoga asanas on bending and stretching. That the car measures 4.8 meters means it is a marvel that the third-row seats exist at all but I won't really recommend these for anything more than 15 to 20 minute short city commutes. Tiguan AllSpace moves with a sense of purpose that is reassuring. (HT Auto/Sabyasachi Dasgupta)

Fortunately, how you customize the seat layout inside the Tiguan AllSpace has no relation whatsoever with how it handles itself. And for the most parts, it is a solid, planted drive that may not be as engaging as what was on offer when the diesel engine was still around but one that still keeps this SUV moving with a genteel sense of purpose.

There's around 190 hp of max power and 320 Nm of torque for the taking and this is enough to ensure that Tiguan AllSpace offers a capable drive, irrespective of how loaded the cabin may be. This here is an SUV that may not excel when being pushed but surely does when commanded to chug down miles after miles of either city or highway roads.

The SUV, actually, comes into its element around the 2,000 RPM mark and put into Sport mode - there are four drive modes, the Tiguan AllSpace puts on a speed mask of sorts that helps it pull forward like an imaginary sweeping road line. And for a slight dose of extra engagement, there are paddle shifters too.

But then again, this here is no rumbling mean machine.

The steering, surprisingly, is on the lighter side although the grip and feedback varies according to the drive mode selected. Overall though, the Tiguan AllSpace seemed just a tad bit reluctant to make the sudden tight turn.

Another area of concern is how the SUV moves over large speed-breakers at moderate speeds. The shock absorbers do let in some of the vibrations even if the plush seats with more than adequate cushioning help to mitigate the disturbance.

Overall though, the quality of ride inside and the drive of Tiguan AllSpace makes it a worthy option to consider for both daily commutes as well as long highway escapades.

The Tiguan AllSpace does offer a lot of comfort when it comes to spending long hours inside but it also seeks to compliment it with premium features - all of which are assured because there is only one variant to opt for.

This solitary variant of Tiguan AllSpace gets a really gorgeous eight-inch main display unit that supports MirrorLink, Android Auto and Apple CarPlay. The Navigation on the screen is bright and crystal clear, and the display itself is easy to reach and responsive. Yes, there are bigger units now available in SUVs several segments below but as this one goes, it serves the purpose and then some. 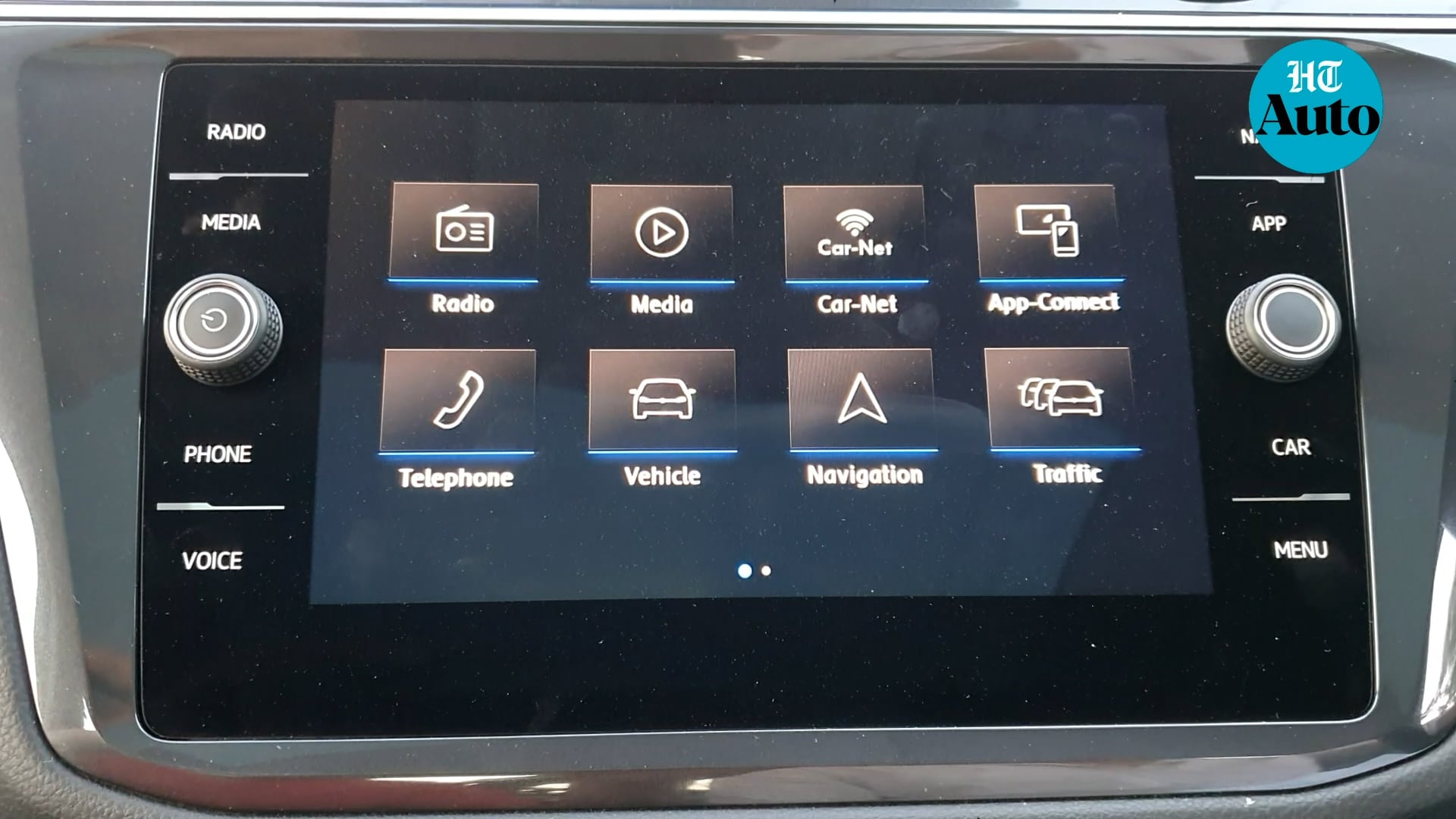 Look up and find a massive panoramic sunroof which is what replaces the roof of the car almost entirely. If the cabin of the AllSpace wasn't already quite classy, the natural light - quite literally, puts the spotlight on all that is on offer. 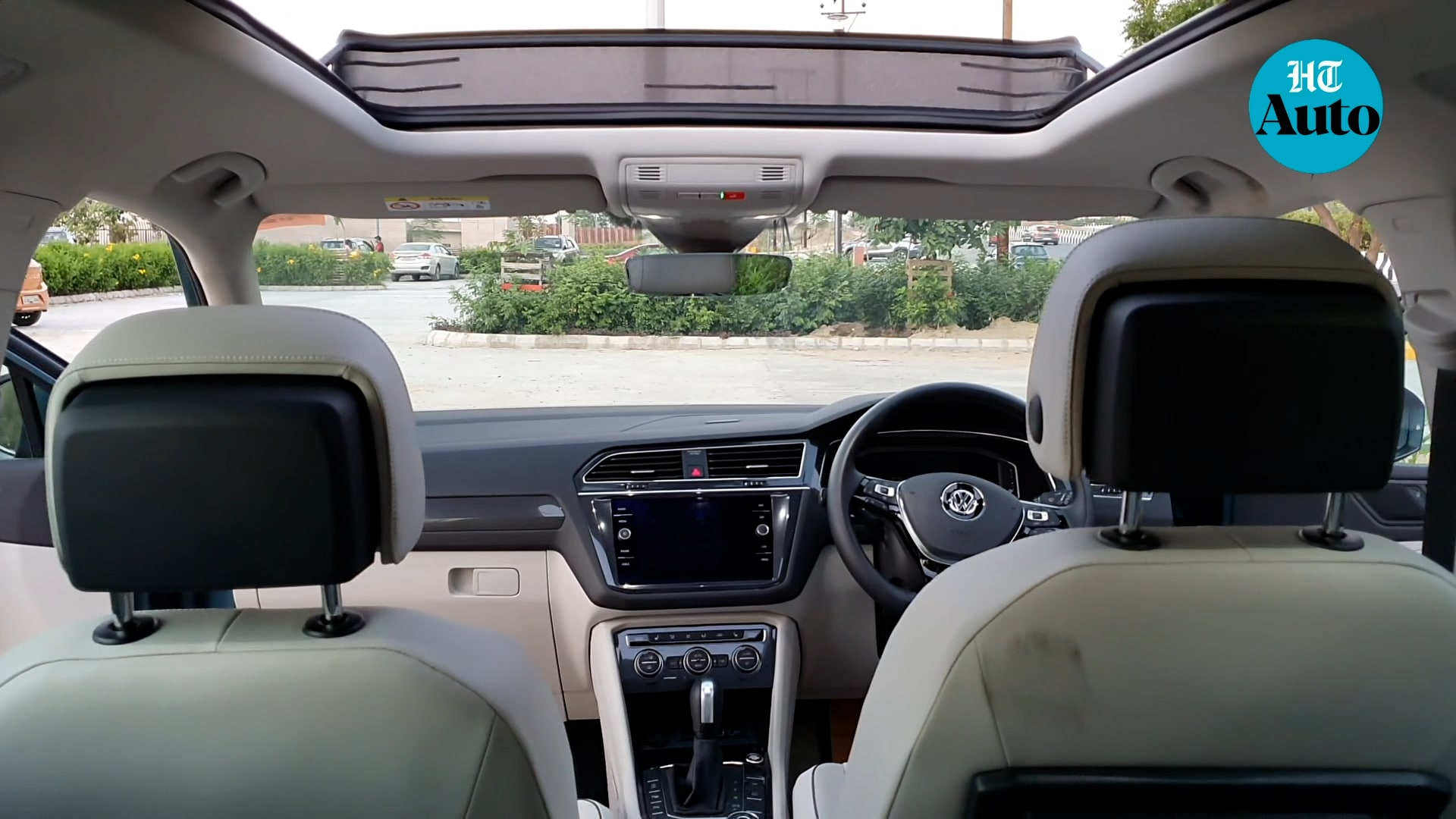 The leather seats, powered-driver seat and three-zone climate control are more features on expected lines while the back of the front seats also offer fold-away trays for a more airline-like experience. Among some of the misses are ventilated seats and air purification system although the latter can be bought from a long list of accessory manufacturers. 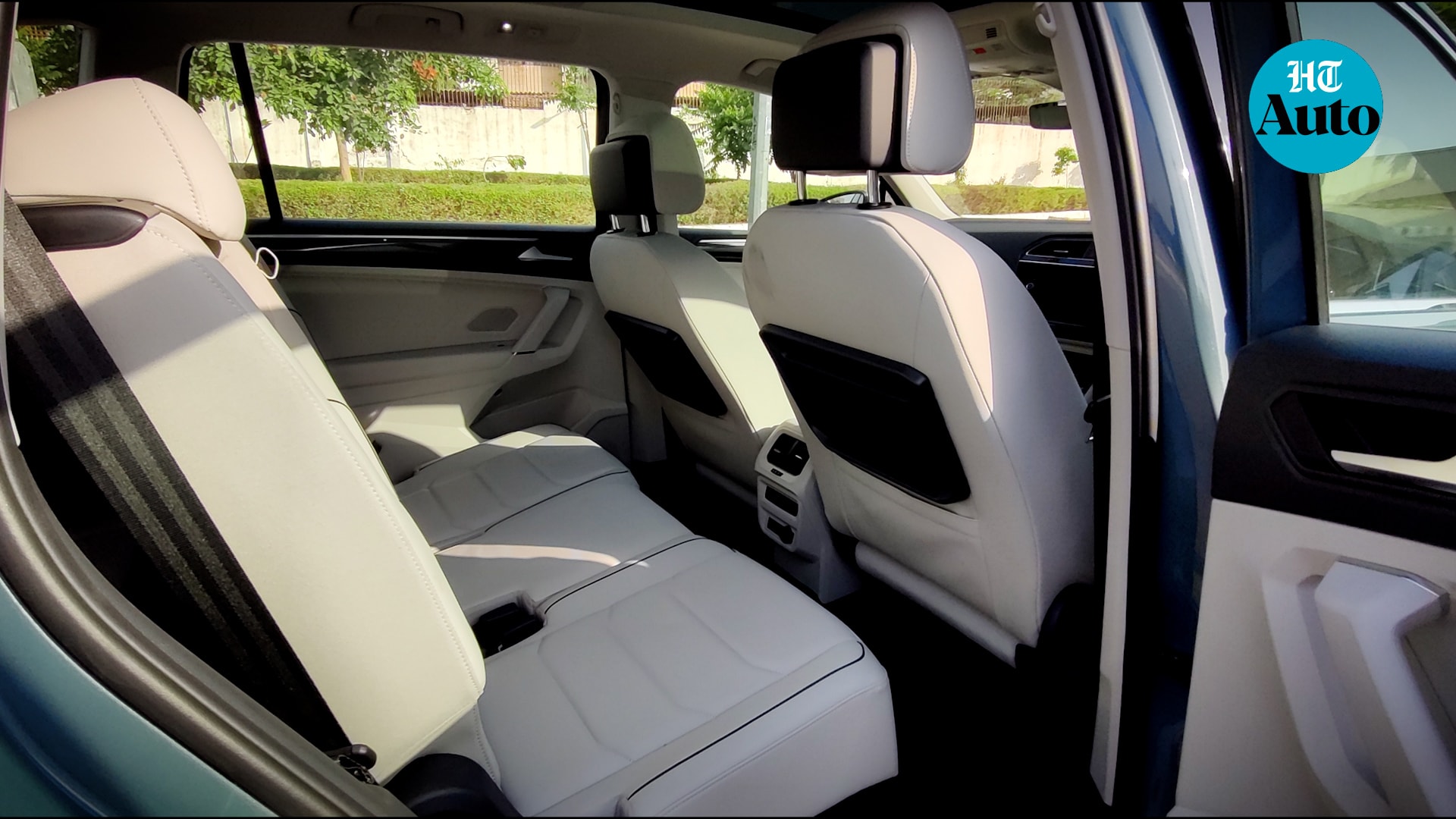 The space for passengers in the middle row is generous and the seats have decent levels of cushioning. (HT Auto/Sabyasachi Dasgupta)

Styling on the Outside

Tiguan AllSpace is a slightly extended version of Tiguan and therefore, has more than just a casual resemblance to what was on offer in the Indian market a little earlier. 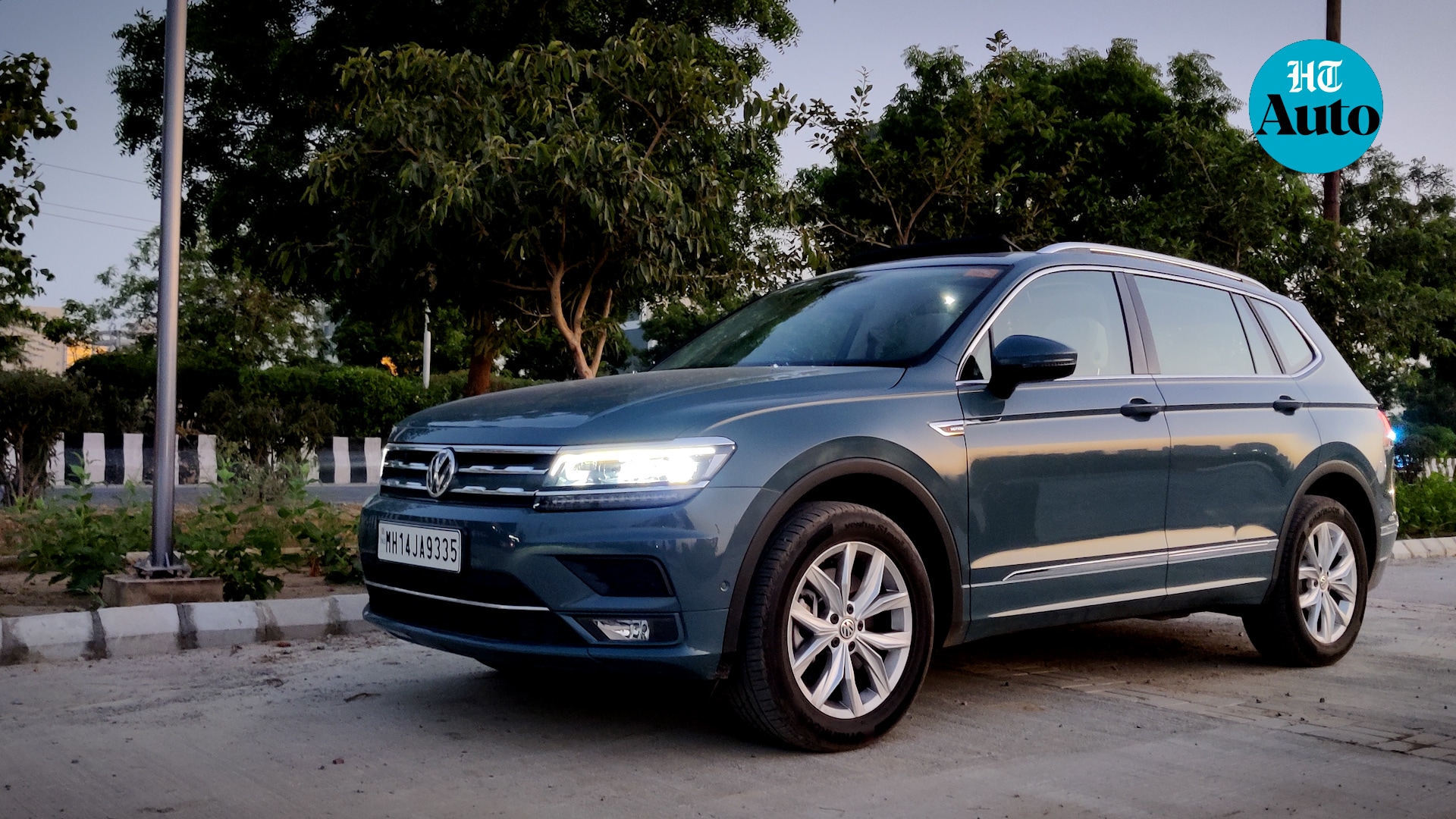 Volkswagen Tiguan AllSpace has straight proportions with little outwardly muscles from any of the four sides. (HT Auto/Sabysachi Dasgupta)

It may fall into the SUV category but the AllSpace is clearly European in how it appears. It has a tad bit of wagon-like genes and a slight dash of chrome carefully incorporated but the square-shaped head lights, the twin horizontal-lined front grille, the bumper with its honeycomb design element and the large circular wheel arches all combine to reaffirm that this here is a Volkswagen. Don't buy the Tiguan AllSpace if the third-row seats are an absolutely crucial factor. Don't buy it if you are hunting for a beefy and muscular visual profile in your next SUV. And definitely don't buy the AllSpace for its hair-raising drive experience.

Most of these are claims that Tiguan AllSpace doesn't even make. 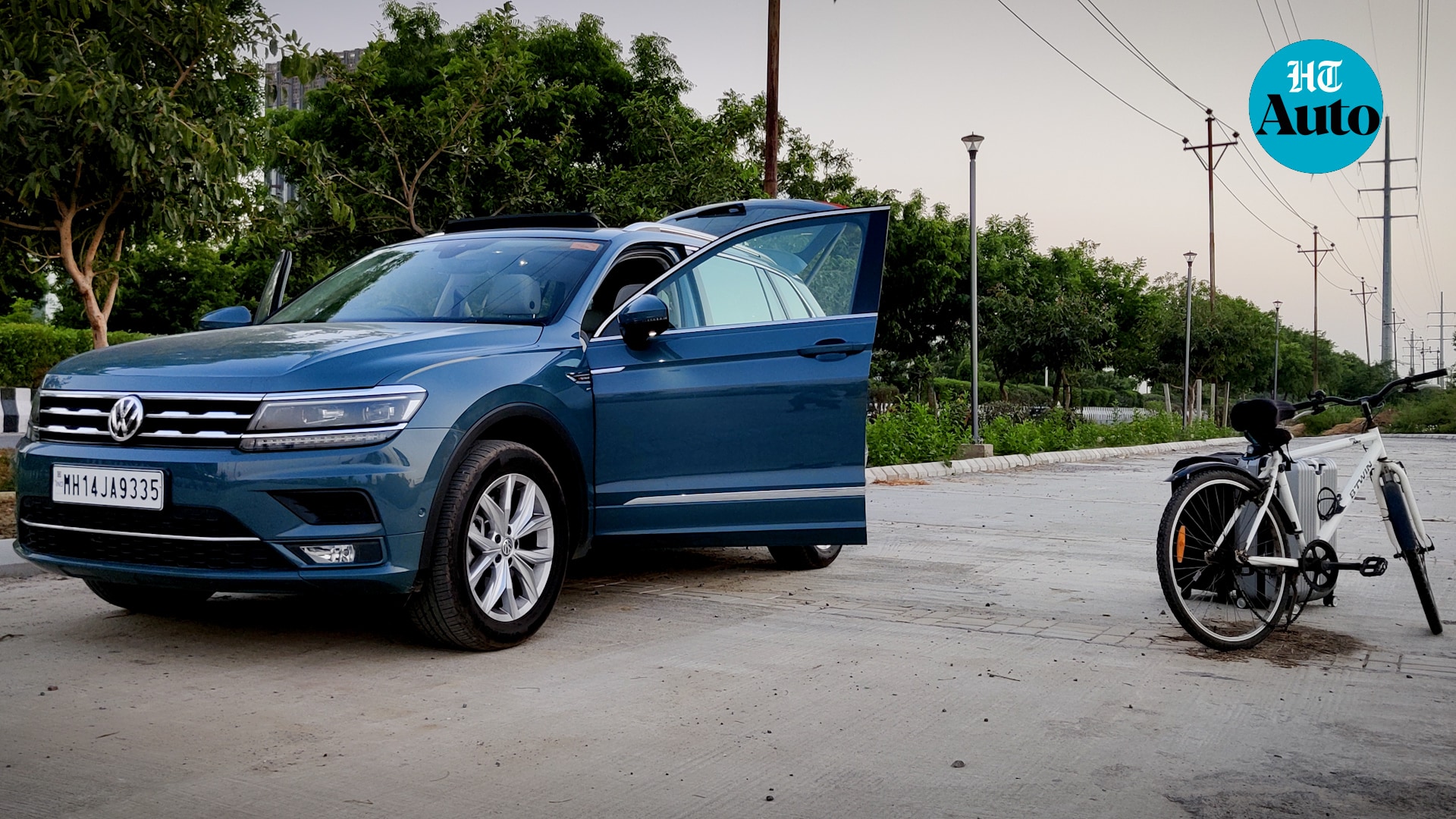 As a vehicle to transport families in comfort or for securely moving recreational items and luggage, the Tiguan AllSpace has more than generous space - the third-row folded down, of course. (HT Auto/Sabyasachi Dasgupta)

Instead, the premium SUV plays to its strengths by offering loads of space for a family of four to five looking at long highway journeys without leaving much of their packed luggage at home. It does stay true to its name, as long as you don't have a large family. The quality of ride, the cabin features and the sheer premium experience of being inside a premium Volkswagen offering is what's on offer here, combined with a drive capability that is more regal than racy.

Volkswagen Tiguan AllSpace appeals to the discerning car buyer in the premium SUV segment and at around ₹33 lakh (ex showroom), it does offer a whole lot to someone with an eye out for the details.