The compact SUV is reportedly named Tarek and is likely to be the North American version of Tharu SUV, sold in China.
By : HT Auto Desk
| Updated on: 09 Sep 2020, 11:06 AM 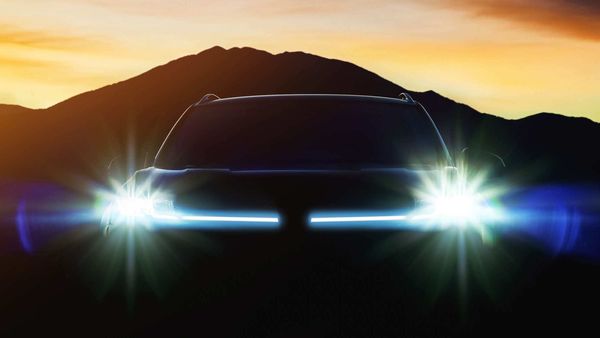 The teaser image of the new compact SUV from Volkswagen shows thin LED lights and the silhouette of the upper portion of the car.

Volkswagen has released the first image and video of its new compact SUV. This new offering will slot under the Tiguan SUV, and is the second proof point of Volkswagen’s doubling-up SUV strategy following the launch of Atlas Cross Sport earlier this year. The official reveal will take place next month, on October 13.

“We’re excited to share the first glimpse of the newest member of the Volkswagen family," said Scott Keogh, president and CEO of Volkswagen Group of America. “Great things come in small packages, as Volkswagen has proven throughout the years with its iconic Beetle, Golf and Jetta. This next car will be no exception."

The teaser image does not reveal much about the upcoming Volkswagen compact SUV. Few things that can be confirmed from the image are the headlights which will have thin LED lights, the silhouette of the upper portion of the car suggests it will look different from the T-Cross models.

The compact SUV is reportedly named Tarek SUV, a part of the carmaker’s Tarek Project, which will produce the first SUV that the brand will produce.

The industrial centre of Pacheco in Argentina is preparing for the launch of the Tarek project at a cost of around 650 million dollars. It aims to implement the global MQB platform, the same as T-Cross, and a brand new paint. In China, Tarek is sold as Tharu, but the Argentine model is unlikely to follow the lines of the Chinese version of the SUV.

The new compact SUV from the German carmaker will be manufactured for the North American market initially. However, launch in other countries cannot be ruled out given popularity of compact SUVs in other parts of the world, especially in India.

Steffen Knapp, Director at Volkswagen Passenger Cars India, earlier told HT Auto that while Covid-19 has thrown up massive challenges for automakers, the key driving factors in the times to come would be a continued preference towards SUVs.

Volkswagen had previously announced that it would drive in four SUVs in India in two years. Knapp took the opportunity to highlight India's growing preference towards SUVs and is confident of success of vehicles like Taigun and even the comparatively more expensive T-Roc.