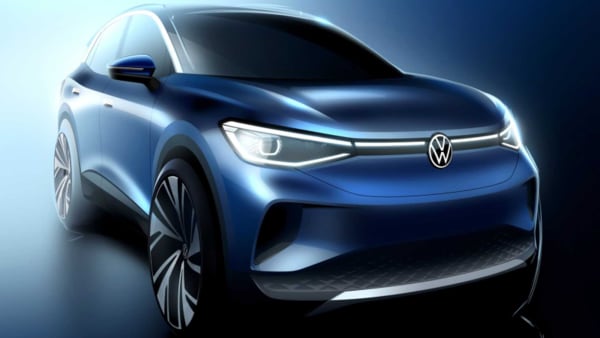 The Volkswagen ID.4 has been under speculations from quite sometime now. Recently, the company has shared a glimpse of the car's exterior profile and headlamps in a new teaser image which reflects how stylish and urban design language the ID.4 is going to carry.

As the teaser suggests, the exterior profile of the ID.4 is of a typical crossover. The front fascia carries a very bolder appeal with a sleek chunk sitting at the place of a traditional grille which is flanked by stretched out LED projector headlamps. From some angles, this design might remind you of the Kia Seltos due to its sleek DRLs extending over at its snout.

Design elements such as curvy beltline, sloping roofline and flared wheel arches come together to give it a very intimidating look and add to the sporty stance of the urban crossover.

It is going to be an all-electric all-wheel-drive (AWD) crossover and if the overall dimensions are taken into consideration, it is expected to be slightly longer than the Tiguan SUV.

Underpinned by the acclaimed VW MEB modular platform, the ID.4 crossover SUV will feature two electric motors at both the axles. The combined system output will be around 198 PS and the car will have a full charge range of around 500 km, as per WLTP cycle.

“With the ID.4, Volkswagen is adding an all-electric vehicle to its offering in the compact SUV class, the world’s largest growth segment", Ralf Brandstatter, CEO of the Volkswagen brand, said. “Following the ID.3, this is already the second model based on the modular electric drive matrix (MEB)."