Preparations to roll out the ID.4 electric SUV at international level are in full swing.Pre-production of the ID.4 has already started at the Anting plant in China, the Chattanooga site will start the ID.4 production in 2022.
By : HT Auto Desk
| Updated on: 20 Aug 2020, 05:04 PM 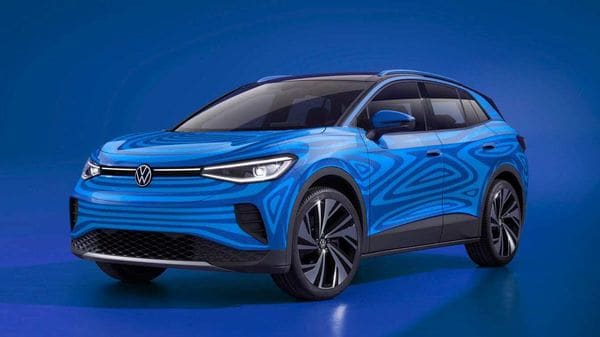 Volkswagen’s electric offensive continues to gather speed as the series production of the carmaker's first all-electric SUV, the ID.4, gets underway in Zwickau. According to Volkswagen, the world premiere of the ID.4 will take place at the end of September.

“With the ID.4, Volkswagen is adding an all-electric vehicle to its offering in the compact SUV class, the world’s largest growth segment", Ralf Brandstatter, CEO of the Volkswagen brand, said. “Following the ID.3, this is already the second model based on the modular electric drive matrix (MEB). Going forward, the car will be built and sold in Europe, in China, and later also in the USA. That is how we are scaling the MEB platform globally and laying the economic foundations for the success of our ID. family."

Volkswagen Group had unveiled ID.4, the first electric compact SUV from the German car giant, in March this year. It will have a range of up to 500 kilometres. The Volkswagen ID.4 is the second model of the ID family and, like the ID.3, will use the German group's modular platform for electric vehicles MEB.

Preparations to roll out the electric SUV at international level are also in full swing. Pre-production of the ID.4 has already started at the Anting plant in China, the Chattanooga site will start the ID.4 production in 2022.

Earlier this week, Volkswagen had issued a statement saying, "In a matter of weeks, Volkswagen will reveal the production version of the ID.4 electric SUV, part of a worldwide strategy to deliver millions of electric vehicles to help combat global climate change."

The plant at Zwickau plays a key role in the system changeover to e-mobility: For the first time, a large car manufacturing plant is being entirely converted to e-mobility, with investments running at some 1.2 billion euros. All conversion work will be completed as scheduled this year.

In 2021, the first full production year as an EV factory, some 300,000 electric vehicles based on the modular electric drive matrix (MEB) will leave the Zwickau plant. The site will therefore become largest and most efficient EV factory in Europe and a trailblazer in the transformation of Volkswagen’s global production network.