New LED head and taillights will define the new look at night and look to move the Tiguan’s design closer to the Mk8 Golf’s new look.
By : Sabyasachi Dasgupta
| Updated on: 17 Apr 2020, 11:49 AM 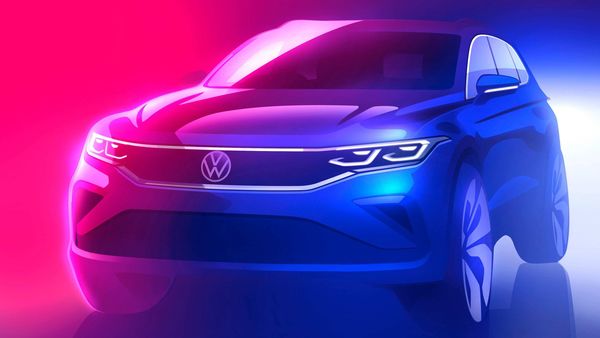 Volkswagen teased the image of the new Tiguan SUV

The facelift version of the second generation Volkswagen Tiguan SUV is coming. The German carmaker has released a sketch showing the design of the front of the compact SUV, which gets a refreshed appearance combined with new technologies and more efficient technology. The new Tiguan SUV will also be offered in plug-in hybrid variant.

A few small changes that look clearer in this exclusive teaser is a new narrower radiator grille and new cut-out headlights like the Mk8 Golf or T-Roc to visually connect with each other. The front is highlighted by the new LED light signature around the projectors.

For the interior, Volkswagen has confirmed the infotainment systems MIB3 released in the renewed Passat, which means that the standard equipment will have a 6.5-inch touch infotainment screen as standard, and optional in 8-inch or 9.2-inch variant.

You can even expect a Digital Cockpit display on the 11.7-inch instrument cluster, new ambient lighting with 30 colour options. Volkswagen has also confirmed the semi-autonomous driving assistant Travel Assist.

The Tiguan PHEV, a plug-in hybrid GTE, will deliver 218 hp, thanks to the 1.4 TSI petrol engine and a 115 hp electric motor fitted to the clutch of the 6-speed DSG gearbox. A lithium-ion battery with 13 kWh will offer a maximum range of 50 kilometres. The Tiguan R will have the 2.0 TSI engine, with a maximum power of 300 hp, 7-speed DSG transmission and 4MOTION all-wheel drive.

Volkswagen has already announced the debut of the facelift Tiguan SUV it has been preparing for a few months. The second generation Volkswagen Tiguan SUV had captivated customers around the world with its elegant and sporty design in 2016.

A year later, Volkswagen reinforced the offer of the best-selling SUV in Europe with the Tiguan Allspace, and 110 mm more in length offering more boot capacity or seven seats . An option that reigns on the continent with 55% of the units manufactured.