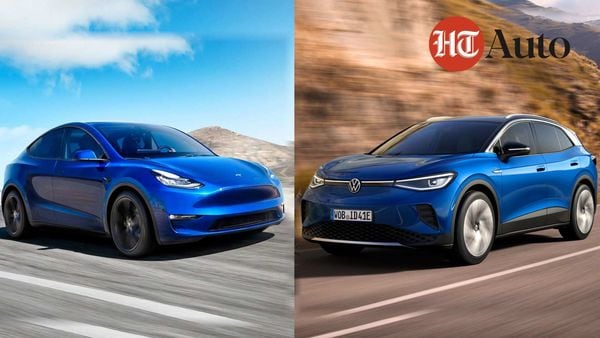 Volkswagen ID.4 electric SUV's (right) pricing strategy is aimed at opening a new front in competition with Tesla and other EV manufacturers.

Volkswagen AG's US subsidiary on Wednesday revealed its ID.4 electric sport utility vehicle and a pricing strategy aimed at opening a new front in competition with Tesla Inc and other automakers.

But Volkswagen is hoping to offset that by offering the ID.4 at a lower price than Tesla's Model Y. Customers can further benefit from federal and state electric vehicle subsidies for which Tesla no longer qualifies.

The ID.4 will initially come at a price of $39,995 and will be about $5,000 less expensive once the company begins building it in the United States, Volkswagen said.

The ID family is an integral part of the Volkswagen brand's ambitious plan to build 1.5 million electric vehicles a year by 2025. In the US market, the ID.4 also is aimed at getting Volkswagen back on the shopping lists of consumers turned off by the brand's diesel emissions cheating scandal.

The ID.4 will be the first electric compact SUV that can sell for about $35,000 - aiming at a high-volume segment and the average price level of vehicles sold in the US market, Volkswagen of America chief Scott Keogh told Reuters.

Combined with three years of free charging on its Electrify America network, Volkswagen dealers will be able to offer the ID.4 for thousands of dollars less than a typical Tesla Model Y.

"We wanted to make sure not only do we have sufficient range, but do we have the price point?" Keogh said.

The ID.4 launch will also test Volkswagen's US dealers. The automaker is asking them to invest in charging stations and other infrastructure, and trying to build online selling capability for electric vehicles.

The ID.4, which will be assembled in the United States starting in 2022, is part of a family of electric vehicles expected to include a reincarnation of VW's popular Microbus van.

"I want a volunteer army, not a draft army," Keogh said, describing his message to dealers at a meeting in Chattanooga, Tennessee, last November. Nearly all of VW's US dealers have agreed to make the required investments, he said.

John Luciano, head of Volkswagen's US dealer council, said that dealers who take advantage the automaker's subsidies for advertising costs can offset investments in charging infrastructure and other equipment.

"If you really pay attention, you can do it at almost no cost," said Luciano, who owns Volkswagen and Toyota stores in Amarillo, Texas. "How many will I sell? I don't know," Luciano said of the ID.4. "We have been getting calls for years about the van."