Volkswagen Beetle has been an iconic car for decades but it now has the make way for Volkswagen Taos in North America because of a massive rise in demand for SUVs.Volkswagen Taos is a compact SUV to be manufactured at the company's Mexican assembly plant.Taos is around 9 inches shorter than Tiguan.
By : Bloomberg
| Updated on: 14 Oct 2020, 07:56 AM 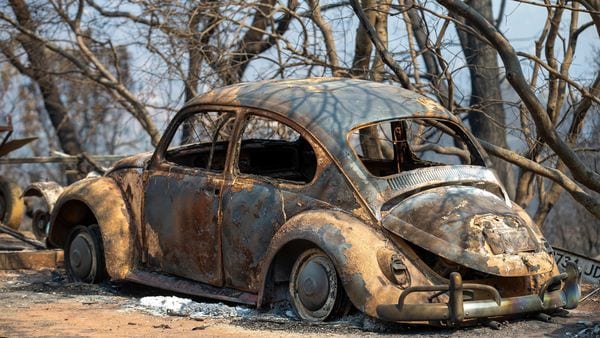 Automakers are so eager to replace less-lucrative cars with higher-margin SUVs, they’re willing to scrap iconic nameplates along the way.

Volkswagen AG’s newest North American model, the Taos, is perhaps the starkest example of this yet. The German automaker made room to manufacture the compact sport utility vehicle in its Mexican assembly plant by ceasing production of the Beetle, one of the most influential cars of the 20th century. Volkswagen Taos is the newest member to the family of SUVs from the German car maker. (Photo: Twitter/@VW)

For automotive product planners, the decision making is simple. The ebb toward crossovers and away from sedans has been relentless, helping put SUVs and trucks on course to seize more than 70% of the U.S. market this year. Crossovers also are a better bang for automakers’ buck -- consumers are willing to pay up for the higher ride height and roomier interior of models that aren’t substantially costlier to develop or build compared with sedans.

“We think the trend is going to continue," Duncan Movassaghi, executive vice president of sales and marketing for VW’s U.S. unit, told reporters during a briefing on the Taos. The automaker sees Americans buying almost 10 million SUVs a year by the end of the decade.

VW is far from alone in being cold-blooded about its cars.

Ford Motor Co. is abandoning sedans in North America, killing off the likes of the Taurus, once the top-selling car in the country. General Motors Co. has ceased several nameplates including the Chevrolet Impala, a model line with more than 60 years of lineage. Fiat Chrysler Automobiles NV also gave up trying to get Americans to buy the 500, the diminutive car used to bring its eponymous Italian brand back to the US in 2011.

(Also read: Honda does U-turn in US, decides to go big with its SUVs)

While those companies are making space in factories and showrooms for SUVs some consumers will recognize -- the Ford Bronco, Chevrolet Blazer and Jeep Grand Wagoneer -- VW eschewed the Beetle for an entirely new nameplate. The Taos is named after a town of less than 6,000 people in the northern New Mexico desert.

By adding the Taos and the all-electric ID.4 to the Tiguan, VW will have three models in the compact SUV segment, similar to how Subaru has the Outback, Forester and Crosstrek, and Jeep has the Wrangler, Cherokee and Compass.

Chief Executive Officer Herbert Diess is counting on an expanded SUV lineup to help VW put an end to losses that predated the German carmaker’s disastrous diesel-emissions scandal. He told shareholders last month the brand was close to breaking even in North America before the Covid-19 pandemic hit. The manufacturer generates the vast majority of its profits in China and Europe and has struggled for years to make money in the U.S.

The Taos will be available in the second quarter of next year. It will be about 9 inches (23 centimeters) shorter than the Tiguan and priced below that model, which starts at $25,245.