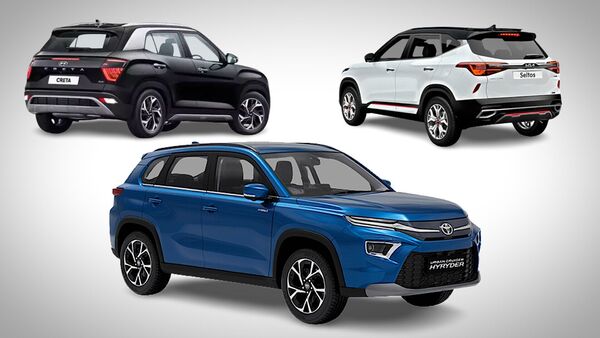 Here is a quick comparison between the Toyota Urban Cruiser Hyryder, Hyundai Creta and Kia Seltos based on their specifications, features and powertrain on offer.

In terms of dimensions, the Toyota Urban Cruiser Hyryder SUV stands 4365 mm long, 1795 mm wide, 1635 mm tall. Compared to Creta and Seltos, which stands 4300 mm and 4315 mm long respectively, the Hyryrder SUV is a longest model in its segment. However, the Toyota SUV's wheelbase of 2600 mm is shorter than the Creta and Seltos by just 10 mm, and shorter by 51 mm than Kushaq and Taigun. The SUV stands on 17-inch alloy wheels, similar to the ones offered on Creta and Seltos.

It boils down to the features to decide which SUV may have the edge once the Hyryder SUV is launched. Toyota packs the Urban Cruiser Hyryder with features such as Head-up Display (HuD), 360 degree camera, a 9-inch touchscreen infotainment screen and reclining rear seats. However, the infotainment screen inside the Hyryder is smaller than the 10.o5-inch units offered inside the Creta and Seltos.

The Hyryder SUV will also offer other features like a panoramic sunroof, wireless charger, ventilated seats, connected car technology like the key rivals.

Toyota Urban Cruiser Hyryder SUV will have an edge over Creta and Seltos in terms of powertrain. The Hyryder is offered with electric hybrid option which is missing in its rivals. Toyota will offer Hyryder with two engine options. These include a 1.5-litre naturally aspirated unit along with a hybrid powertrain with the same engine. The engines can produce output between 100 and 114 hp and peak torque between 135 and 141 Nm. The transmission job will be handled by either a five-speed manual, a six-speed automatic or an e-CVT unit.

Hyundai offers Creta with a 1.5-litre unit mated to a manual, iMT and CVT transmission. There is also turbo petrol unit with 7-speed DCT transmission besides a 1.5-litre diesel unit with manual and automatic. Kia offers Seltos with similar engine specifications as Creta. Both Creta and Setos are more powerful, at least on paper, in terms of output. Both SUVs offer peak output ranging between 115 and 140 hp and peak torque between 144 and 242 Nm.