Toyota has taken the covers off its most powerful Corolla model yet. Inspired by racing cars, the 2023 Toyota GR Corolla made its debut early today as a track-ready hot hatch. It will take on rivals like Volkswagen Golf R among others. The GR Corolla, which will be offered in two trims including Core and the limited Circuit Edition, will go on sale later this year in markets abroad.

The GR Corolla comes powered with a 1.6-litre inline three-cylinder turbo intercooled engine found in the GR Yaris. It is capable of churning out maximum output of 304 hp and 370 Nm of peak torque. The engine comes mated to a 6-speed manual gearbox and an all-wheel drive system. Optimising the GR-FOUR 4WD system to match the specifications of the GR Corolla was one of several initiatives undertaken to create a car that can be safely controlled, even when pushed to the limit. The system gives drivers a choice of 60-40, 50-50 or 30-70 power distribution to the front and rear wheels.

Based on the GA-C platform, the basic body structure of the Toyota Corolla Sport was adopted while designing the GR Corolla, making it appear quite a looker from all sides. The GR Corolla gets black GR badged functional matrix grille, flanked by functional air ducts on both sides. The front grille on the Circuit Grade comes in gloss-black and features integrated LED fog lamps. Auto on/off LED headlamps and LED DRLs are standard on both grades.

On the Circuit Edition, the roof is made of a forged carbon sheet moulding compound. This lightweight, highly rigid material keeps off the ounces that a steel roof would bring and helps lower the car’s centre of gravity. Aluminium is used for the hood and front door panels, with light and strong high-tensile steel in critical areas to ensure the car’s structure can safely absorb and dissipate impact forces. 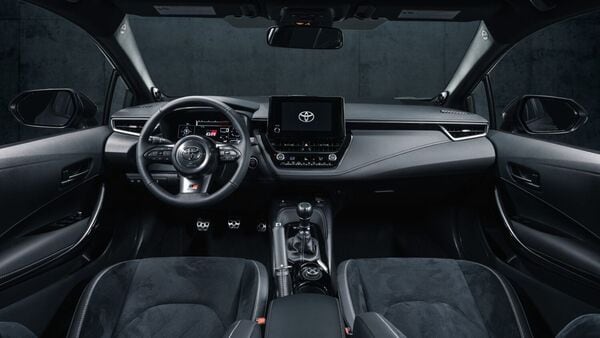 The interior of the Toyota GR Corolla i s inspired by racing cars and gets red stitching to add to its sportiness.

The interior of the GR Corolla is also race inspired. The cabin gets an all-black theme with red trim details around the door handles, centre console, steering wheel and side air vents. The suede and synthetic leather-trimmed sport seats gets red stitching, red mesh inserts and GR badged headrests.