Toyota Motor has hiked the price of its two flagship models Fortuner SUV and Innova Crysta MPV from July. The hike has increased price of Fortuner by more than ₹one lakh.
By : HT Auto Desk
| Updated on: 04 Jul 2022, 09:44 AM 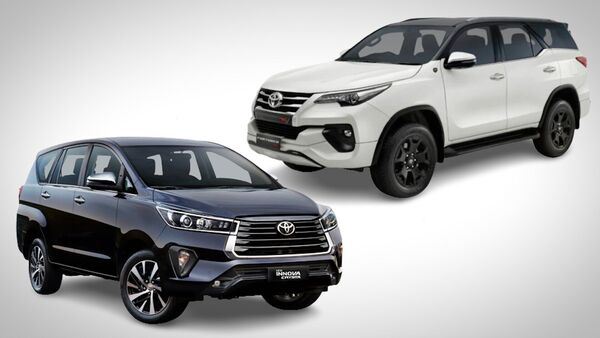 Toyota Motor has hiked the price of Fortuner SUV and Innova Crysta MPV from July.

According to the new price list, the Toyota Fortuner SUV will cost up to ₹1.14 lakh more than the previous ex-showroom price of its top-of-the range variants like Legender and GR Sport models. The lowest amount of hike has been implemented on the 4X2 base variants for petrol and diesel with both manual and automatic transmission units. The 4X4 diesel manual and automatic variants has seen a price hike of ₹80,000 each.

Toyota Innova Crysta prices have also been hiked by up to ₹86,000. The maximum hike has been implemented across variants like the ZX 7-seater automatic and the GX 7-seater and 8-seater variants. All other variants offered in diesel have received a price hike of ₹27,000. The price of the petrol variants of the Innova Crysta remain similar.

The price hike was necessitated due to the rise in input costs and other factors, Earlier in March, Toyota had issued a statement announcing price hike of its cars from April. Toyota had hiked prices of Innova Crysta and Fortuner between ₹36,000 and ₹1.20 lakh depending on specific models and their variants. The price hike in April and the recent one are two of the steepest hikes in price of Toyota cars in recent times.

The price hike comes close to the heels of Toyota unveiling its first compact SUV for the Indian markets last week. On July 1, Toyota introduced the Urban Cruiser Hyryder electric hybrid SUV. The new SUV is aimed to take on the Korean rivals like Hyundai Creta and Kia Seltos, the leaders in the compact SUV segment.