The fastest, most powerful Defender SUV launched in India at ₹1.82 crore 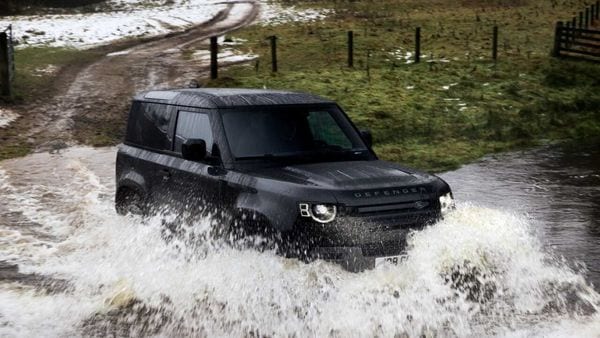 Land Rover has launched the V8 version of the new Defender SUV in India.

After launching the new Defender SUV, both in 90 and 110 variants, in India earlier this year, Jaguar Land Rover has brought in the fastest and most powerful Defender SUV in its lineup to the country. The company has launched the V8-powered model in both variants at a starting price of ₹1.82 crore.

Jaguar Land Rover has officially listed the Defender SUV, which is powered by a V8 engine, on its website recently. The Defender with V8 engine has been launched in both the standard and Carpathian Edition variants of the SUV.

This is the same model that the carmaker introduced to the global markets back in February this year. The V8 version of the new Defender tops the range of the brand's new adventurer and is available in both 90 (3-door) and 110 (5-door) versions.

The Defender with V8 engine stands out from the rest of the models through its design. The Carpathian Edition receives an exclusive body colour called Carpathian Grey contrasted by a black hood, roof and tailgate. It also benefits from a satin protective film. It also gets the V8 logo at the bottom of the front door, four tailpipes and 22-inch alloy wheels and 15-inch discs and blue callipers.

The Defender V8 can also be recognised by its twin tailpipes, Ebony Windsor black leather upholstery and Alcantara-wrapped steering wheel. It also gets a new curved centre 11.4-inch touchscreen inside the cabin.

The SUV is powered by a supercharged 5.0-litre V8 engine, the most powerful within the Jaguar Land Rover Group. It is capable of producing 525 hp of power and 625 Nm of peak torque. The all-wheel drive SUV's engine is mated to an 8-speed automatic gearbox and is also the fastest in the Defender family. The Defender 90 can sprint from zero to 100 kmph in 5.2 seconds and comes with a top speed of 240 kmph.

Earlier, Jaguar Land Rover had launched the Defender 90 in three powertrain options. These include a 2.0-litre petrol with 296 hp of power offering torque of 400 Nm, a 3.0-litre petrol which delivers 394 hp of max power and has 550 Nm of torque, and a 3.0-litre diesel unit with delivering power of 296 hp and torque of 650 Nm.