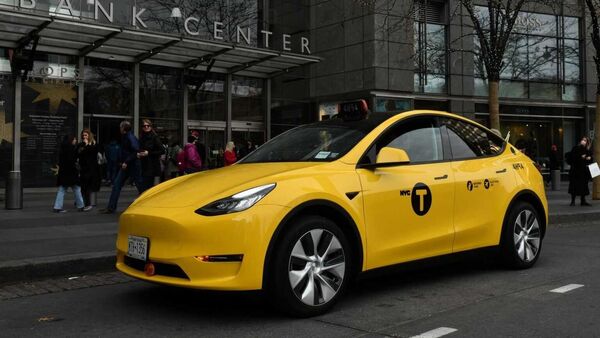 If you are looking for a taxi in New York City, there is a chance that you could hail a Tesla Model Y. The electric SUV has joined the city's iconic yellow taxi fleet under the Gravity Mobility's electric cab fleet. The EV has now joined Ford Mustang Mach-E as the second EV taxi option for commuters. Tesla Model Y is now authorised under an EV pilot program adopted by New York City's Taxi and Limousine Commission.

Tesla Model Y as new EV taxi is on show at the ongoing New York International Auto Show. The Model Y yellow cab made its debut at the event. Telsa Model Y is a three-row seven seater electric car. It claims one of the quickest acceleration among EVs with a sprint from zero to 60 mph in less than four seconds. With an estimated range of around 530 kms on single charge and a top speed of 250 kmph, Tesla Model Y is one of the flagship models from US-based carmaker.

The electric vehicle fleet and infrastructure startup says its Tesla Model Ys are the first to be commissioned as yellow cabs. While several Tesla Model 3 sedans have recently entered service as New York yellow cabs, Gravity's Model Y could offer more space for luggage and passengers.

Moshe Cohen, founder and CEO of Gravity, said, “This is another great news for Gravity as we reinvent what it means to travel by taxi in the greatest city in the world. The Model Y is the first Tesla that truly lives up to all of our expectations for a quality taxi ride. New Yorkers and visitors alike will be able to ride in one of the most advanced vehicles ever made, with Gravity's own custom features that deliver a first-class experience for a standard cab fare."

Gravity Mobility is an app-based cab startup, which also makes charging equipment. The company claims its chargers are designed to outperform Tesla's superchargers, offering compatibility for a wide range of models to charge in minutes.