Tesla has been forced to push the back the production of its fully-electric pickup Cybertruck till next year. The Cybertruck was first unveiled back in November 2019.
By : HT Auto Desk
| Updated on: 11 Dec 2021, 09:26 AM 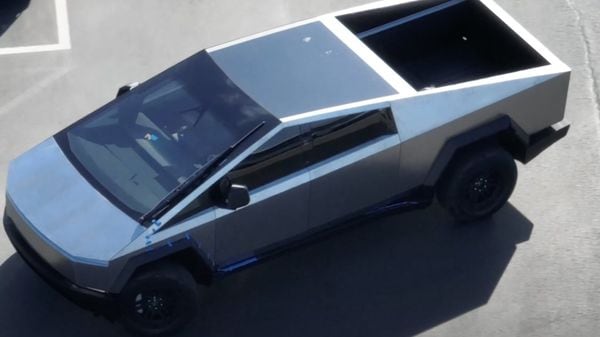 Tesla Cybertruck, with a long wiper, was spotted testing at the EV-maker's Fremont facility in the US. (Image courtesy: Twitter/@SawyerMerritt)

Tesla’s much-awaited all-electric pickup Cybertruck has been spotted testing at the EV-maker facility in California, US, with a number of features that were not seen in the model unveiled two years ago. A video has been shared widely on social media of the Cybertruck’s testing which shows the pickup truck with a giant windshield wiper and side mirrors.

Tesla CEO Elon Musk had unveiled the Cybertruck in November 2019. The model used for the unveiling two years ago did not feature the windshield wiper or the side mirrors. The Cybertruck, made of stainless steel used in rockets, is expected to go into production next year and reach volume production in 2023. It has been delayed due to major crisis from supply-chain woes and the global semiconductor shortage.

The video of the Tesla Cybertruck shows the electric pickup truck doing several round at the Fremont facility test tracks. Besides the new features spotted during the test run, the Cybertruck is expected to come with a high-end four-motor variant when it is formally launched in the market. CEO Elon Musk had earlier said, "Initial production will be 4 motor variant, with independent, ultra fast response torque control of each wheel. Will have both front and rear wheel steer, so not just like a tank – it can drive diagonally like a crab."

Musk had also confirmed that the Cybertruck will feature Tesla's flagship tech for future, meaning it will be a technology powerhouse. Tesla is likely to implement the steer-by-wire system on the Cybertruck that is currently being developed. The Cybertruck may come with a yoke steering, often seen used in racing cars.

Tesla claims Cybertruck has a range of nearly 950 kms on single charge, can accelerate from zero to 100 kmph in just three seconds and is capable of towing up to 6,300 kilos of weight. Once launched, the Cybertruck will take on rivals like the GMC Hummer EV, Ford F-150 Lightning and Rivian R1T electric pickup trucks in the US markets.