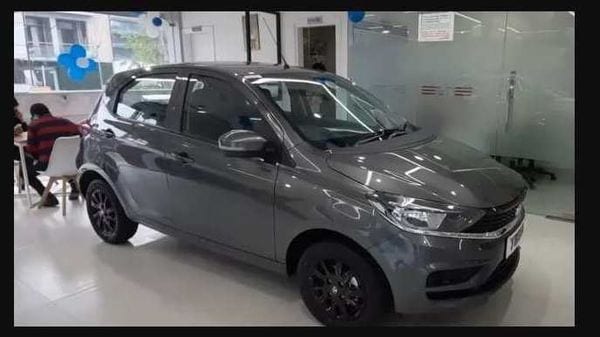 The spotted Tata Tiago limited edition can be seen finished in a shade of Daytona Grey. Image Credits: YouTube/ TheCarsShow by Arsh Jolly

Tata Motors introduced the Tiago limited edition car last month at a price tag of ₹5.79 lakh (ex-showroom, Delhi). The hatchback has now started arriving at the company dealerships and was also recently spotted at one.

The model caught under the cam (above) can be seen finished in a shade of Daytona Grey. In addition to this, the car is also available for purchase in two more colour shades including Flame Red and Pearlescent White. The limited-spec Tiago has also received black coloured 14-inch alloy wheels which seem to complement the outer paint scheme of the car. In addition to the regular trim, the Tiago limited edition comes fitted with a rear parcel tray and a five-inch touchscreen infotainment system with a voice command system.

Under the hood, the car gets the same 1.2-litre Revotron petrol engine which is known to churn out 85 bhp of maximum power and 113 Nm of peak torque. This motor sends power to the front wheels via a five-speed manual unit.

Tata Tiago has been a strong performer in the Tata's lineup ever since its launch in 2016. The company also rolled out out the 3,00,000th unit from its Sanand plant in Gujarat in 2020. It was also the first car under Tata's IMPACT design philosophy. Tiago has also scored a four-star rating from Global NCap safety tests and some of its main features include dual air bags, rear parking assist and brake force distribution.

At the launch of the new Tiago limited edition, Vivek Srivatsa, Marketing Head, Passenger Vehicles Business Unit, Tata Motors said, “Since its launch in 2016, the Tiago has been very successful in its segment and has been appreciated by all. We are confident that through the introduction of this limited period variant and in alignment with our New Forever philosophy, we will continue to bring excitement in this space while catering to the ever-evolving demand of our consumers."