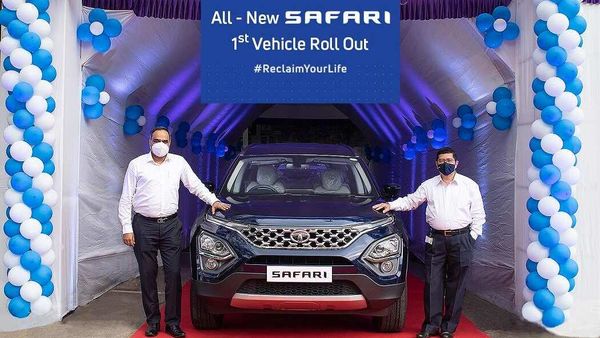 The first 2021 Tata Safari SUV model being rolled out of production facility.

Tata Motors has revealed the first look at its 2021 Safari SUV on Thursday. The carmaker has rolled out the first of the 2021 Tata Safari SUV ahead of its formal debut later this month. In a flag-off ceremony, the first Safari was rolled out of the line from its plant in Pune.

The bookings for the Safari SUV will also begin soon.

The design of the new Safari SUV bears Tata's Impact 2.0 design language that showcases its all-purpose nature. The new Safari SUV, previously codenamed Gravitas and showcased at the Auto Expo last year, has a more enhanced stance in its new avatar.

The carmaker has already revealed key details like the imposing new front grille, the iconic stepped roof with chrome garnish on the D pillar, and an imposing tailgate as some of its key design highlights. The wheel arches are also rather imposing, enhancing the rugged nature of the SUV that promises to take on any terrain.