Suzuki to debut Ertiga facelift Sport Edition in this country. Check what is new

The Ertiga Sport facelift will be launched mainly in the SouthEast Asian markets like Indonesia. There is no word whether Maruti will bring this model to India.
By : HT Auto Desk
| Updated on: 04 Nov 2021, 01:35 PM 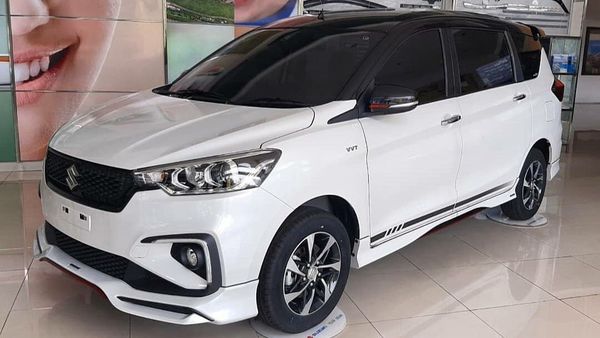 The Ertiga three-row MPV, sold in India by Maruti and Suzuki in global markets, is all set to get a facelift version soon. While Suzuki in Indonesia has teased a new car on its social media handles, which has similarities with the seven-seater MPV, the new Ertiga Sport models have already started to arrive at dealerships.

Suzuki had earlier confirmed that one of the two new cars it will launch at the GIIAS this year will be a family car or an MPV. Recently, Suzuki shared a teaser which read, "A privilege and pride will build confidence. Look forward to the presence of something special for the pride of the Suzuki family." The teaser shows the front bumper of the new Suzuki model which is in particular similar to that of Suzuki Ertiga around the fog lamp section.

It is expected that the 2021 Suzuki Ertiga Sport facelift model will officially make debut at the upcoming Gaikindo Indonesia International Auto Show next week. According to reports, the new Ertiga Sport will be a limited edition model with just 125 units to go up for sale.

The new Ertiga Sport stands 130 mm longer than the previous model. The boot now will have more space to fit luggage as it has become wider by 40 litres. The leg room for the second row passengers has also been expanded by 70 mm.

Under the hood of the Ertiga Sport Limited Edition will be a 1.5-litre four-cylinder K15B petrol engine which also powers the Jimny SUV. The engine is capable of generating maximum power of 103.2 hp at 6,000 rpm and 138 Nm of peak torque at 4,400 rpm. The engine is likely to come mated with an automatic transmission as well as a 5-speed manual.