This is not the first time that Suzuki has tried to build a concept car which has some inspiration from motorcycles.
By : HT Auto Desk
| Updated on: 04 May 2021, 02:44 PM 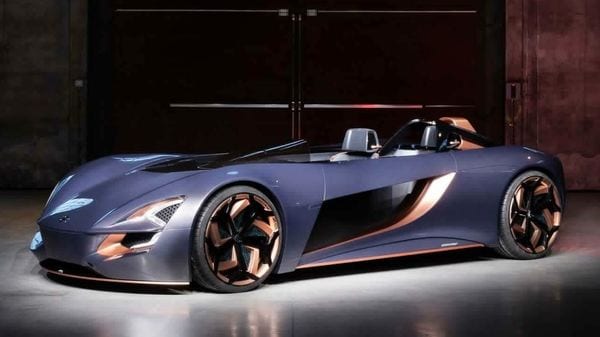 Suzuki Misano concept car has been designed by students of the Master in Transport Design at IED Torino.

Suzuki has unveiled its latest concept car Misano, an electric vehicle created in collaboration with the European Institute of Design (IED). More than 20 young design talents from different countries participated in the project to come up with this concept car. The two-seater car, inspired by motorcycles, is yet another example how car designs have evolved over the years.

This is not the first time that a vehicle manufacturer has attempted to build a car that inspired by two-wheelers. In fact, this is not even the first time that Suzuki has tried to make a car that has some inspiration from two-wheelers. 20 years ago, Suzuki had showcased GSX-R/4 concept car which borrowed a 1.3-litre DOHC engine that used to power the GSX-1300R Hayabusa. This was also a two-seater concept car, but it never saw daylight.

In 2014, Volkswagen showcased the XL Sport at the Paris Auto Show. The concept car has superbike engines borrowed from Ducati. It was a two-seater concept with a 197-horsepower V-twin engine from Ducati 1199 Superleggera motorcycle.

Suzuki Misano is compact in size, measuring just 4 meters in length. Just like in a motorcycle, the passenger seat is located behind the driver's seat. The entire right side of the car has been sacrificed for the battery pack and storage space. It also does not have a roof and is lightweight like most two-wheelers.

Kimihiko Nakada, Director of the Suzuki Design Center, said, “Thanks to the collaboration between IED and the Suzuki brand , a new vehicle concept has been created that includes both the manufacture of compact cars and Suzuki motorcycles. The Misano is a thesis born from the passion of young designers and developed as a project in a design center to offer the next generation a new lifestyle experience "

At the moment, Suzuki has not revealed any details about the powertrain or even the size of the battery that will power the car. There is also little chance that this car will go into production either. Even if it does, Suzuki is likely to manufacture limited number of units in the future.