Home Auto Cars News Storming Out Of Water And Dirt: This Armoured Vehicle Is As Fierce As It Can Get

Storming out of water and dirt: This armoured vehicle is as fierce as it can get 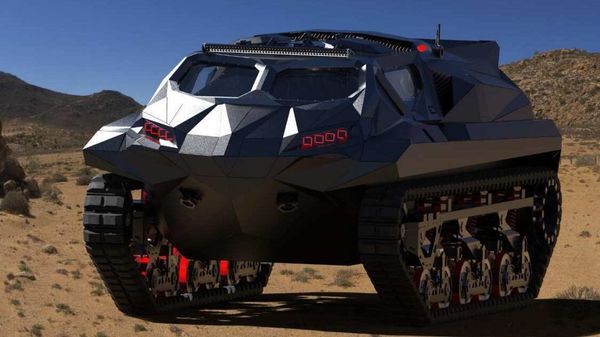 Ukrainian company Highland Systems has recently showcased its multi-role armoured vehicle called 'Storm' at the IREX defense expo in Abu Dhabi. The high-speed, amphibious military vehicle can get in and out of both water and dirt, and comes with a long-range hybrid powertrain.

The tank-like vehicle weighs around 8,000 kg and comes with a capacity for six occupants. On land, its top speed is 140 km/h (87 mph) and in water, it is capable of doing an impressive 30 km/h (18.6 mph), around two to three times faster as compared to larger competitors. It can currently handle waves up to 1.5 metres (60 inches).

Storm can run purely on battery power for 1.5-3.5 hours depending on the speed while it has a range of 18-36 hours on hybrid mode with its diesel range extender running. The versatile vehicle is a quick performer thanks to 2,500-horsepower produced by its electric powertrain.

(Also read | Kia has a military vehicle in concept form. And it looks quite the mean machine)

The vehicle gets ground clearance of 50 cm (20 inches) and durable rubber tracks which help the Storm to climb vertical step-ups as high as 150 cm (60 inches) or even move across a 200 cm (80-inch) wide moat. The armoured vehicle offers protection from ballistics, mines and IEDs up to STANAG level 1 or 2. It can also be configured to be operated completely on remote control, thus giving scope for unmanned or even autonomous missions.

Currently a prototype, Storm is still undergoing testing, as reported by New Atlas. Highland Systems is planning to develop a submersible version of the vehicle that will be capable of diving below the surface of water. This will make the vehicle an all-rounder - a tank, a boat, and a submarine - all in one.

A wheeled version is also in the works. Further, the company is working on integration and testing of standard combat modules and also plans to take the vehicle to serial production soon.