Home Auto News Kia Has A Military Vehicle In Concept Form. And It Looks Quite The Mean Machine

Kia has a military vehicle in concept form. And it looks quite the mean machine

The Light Tactical Cargo Truck Concept from Kia is based on a modular platform and can seat four in the cabin and another 10 in the rear section.
By : HT Auto Desk
| Updated on: 01 Mar 2021, 09:04 PM 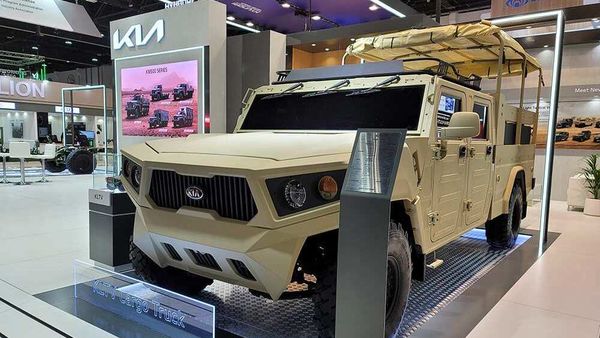 Kia concept military vehicle on display at a defense expo in UAE.

Kia is known as much for designing great looking SUVs as its stunning sedans that are commonly seen in many global markets. But Kia isn't really a name that has much of a presence - or any, for that matter - when it comes to military vehicles. And yet, a concept military vehicle from the Koreans was quite the show-stopper at the recently-held IDEX Defense Expo in UAE.

Kia chose to showcase its Light Tactical Cargo Truck concept at the expo and looked every bit the mean machine that could be at ease in battlefields. Reports suggest the concept vehicle has a cabin space to accommodate four soldiers while its extended rear can seat up to 10 more soldier along with their military equipment.

The concept vehicle is based on a modular platform which means that it can eventually be turned into a vehicle for wide-ranging purposes including troop transportation, weapons delivery, reconnaissance missions etc.

The diesel engine under the hood of the vehicle is capable of producing 225 hp of power which is mated to an eight-speed automatic transmission unit.

Kia has a keen eye on the military transportation market and may want to play a larger role in the times to come. In October of 2020, Kia had announced plans of developing new-range of military vehicles which would eventually replace some of the vehicles already in use by the South Korean military.

Kia has reportedly signed a joint venture with the South Korean government under which it will provide the country's army with 5-ton bulletproof vehicles. The car maker also announced that its military standard platform will enable specialized vehicles to offer the absolute latest in commercial technologies.