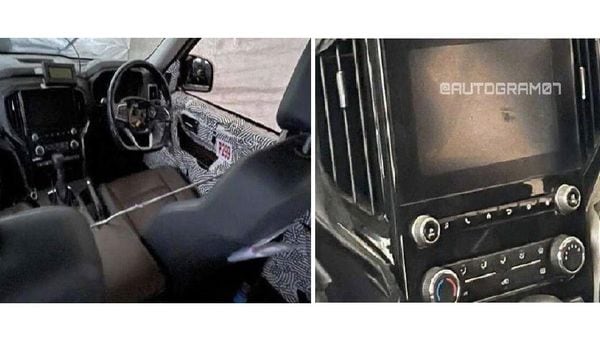 The new Scorpio will get a much-advanced interior boasting a range of new features.

Mahindra has a lineup of over six all-new cars slated to be launched in the Indian market by 2026. The most immediate models from Mahindra will include the all-new XUV700 later this year, and the 2022 Scorpio that goes on sale next year.

The new Scorpio has been spotted on several occasions in India. The new-gen model will be a direct replacement for the existing car and a completely new iteration from the skin to bone. It will make use of a new platform, technology, and powertrain. Also, there will be a heavily tweaked exterior design to distinguish it from the current model.

Now new spy shots have emerged on the internet hinting that the 2022 Scorpio will get a much-advanced interior boasting a range of new features.

There will be a centrally placed touchscreen infotainment system flanked by vertically stacked air vents on either side. Below this, there will be buttons and dials for infotainment settings. Also, the temperature will be controlled by dials, while for AC modes, buttons are visible in the second image (right). Sadly, the spotted variant shows a traditional handbrake and not an electric handbrake unit.

Other visible details include three-spoke flat-bottom steering that gets silver hints. The wheel also gets several buttons for controlling cruise control and media functionalities. The image isn't clear enough to reveal if the driver's scene is fully digital or not, however, it is likely to be a fully digital unit.

Under the hood, expect the new Scorpio to get a 2.0-litre mStallion petrol engine and 2.2-litre mHawk diesel. Both of these units will be sourced from the Thar SUV. There will also be an automatic transmission option.

The new Scorpio will go on sale in India next year.